Support the gun registry or you don’t know jack 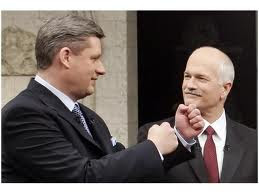 These are just a few recent stories in the country-soon-to-be-naked-of-the-long-gun-registry:

July 2009: Joan Hanson, daughter, and granddaughter shot dead by Ms. Hanson’s estranged hunter husband with his legally owned rifle, which he later turns on himself. January 2010: Stephanie Hoddinott shot dead by a former boyfriend, using a legally acquired handgun he then uses to kill himself. March 2010: three women shot near Belleville by a male acquaintance of one of them; two die. Within days, Const. Vu Pham is shot and killed by hunter Fred Preston, apparently despondent about the break up of his marriage. Weeks later, disgruntled Edmonton car dealership employee Dave Burns walks into work firing a sawed-off shotgun. Manager Garth Radons dies and Burns turns the gun on himself; he’d apparently been suspended for uttering racial slurs and posting sexually explicit photos mocking another employee. Radons’ wife, a police officer, is among the first on the scene.

How does the long gun registry help prevent this litany of death, including suicide, and crime, including murder? Knowing who has which guns allows police to remove them as a preventative measure, should it become necessary. In thePreston case, if his estranged wife had reported any threats he made to police, they could have removed Mr. Preston’s guns. ALL his guns, which isn’t possible if they aren’t all listed somewhere handy, like, say, a long gun registry.

Since its creation, some 22,000 firearms licences have been denied and over 8,000 guns surrendered and confiscated because of safety concerns like those posed by Mr. Preston. Of the revoked guns, 74 per cent were nonrestricted shotguns and rifles. The boundary between “law-abiding duck hunter” and “criminal” only takes a fraction of a second to breach: how long does it take to pull a trigger? In light of these statistics, how can opponents of the registry continue to deny it saves lives?

In fact, many lives have been lost at the hands of "legal" gun owners. Having a gun in the home, rather than making you safer, dramatically increases the chance of death. Those suspicious of statistics and their collection may prefer to believe in unreported crime and--coming soon to a parliament near you, perhaps--imaginary crime. (With the crime rate plummeting, we’ll need to fill all those new penitentiaries somehow.)

Dr. Ted Miller's 1995 look at gunshot wounds in Canada, published in the Canadian Medical Association Journal, estimated that 1991 gunshot wounds cost Canada $6.6 billion (1993 dollars), representing nearly $9 billion today. About $63 million was associated with medical and mental health and $10 million with public services; productivity losses exceeded $1.5 billion. The remaining dollars were attributed to "pain, suffering and lost quality of life." Miller didn’t take into account costs associated with the justice and incarceration systems, but it’s clear that the enormous costs of gun violence—including “legal gun” violence--dwarf the cost of the registry. Even preventing the loss of one or two lives—or one or two shootings--pays for the registry, if you’re callous enough to consider only dollars and cents. At $3-4 million a year, the long gun registry is an incredible bargain.

The RCMP and the associations of chiefs of police, the women’s organizations, suicide prevention, emergency and other medical associations have unequivocally come out in favour of the gun registry, proven a critical tool in the prevention of suicide and domestic violence, especially in rural settings.

Gutting the registry when all these groups are in favour of it and the “duck hunters” are against it is really letting the tail wag the dog. If this same “duck hunter” brain trust decided that our murder laws don’t prevent murder, would you strike those laws down, too, Mr. Harper?

So there you have it, Messrs. Harper and Layton: either you ensure the registry survives, or you betray your sacred responsibility to Canadians, including women and rural people. Either you support the registry or you don’t know jack.