Had a nice chat with Renée Ghert-Zand the other day, about the whole David Gilmour brouhaha.

Her summary of the issue:

[Gilmour’s remarks came in a short, informal interview with a writer named Emily M. Keeler for Random House’s Hazlitt literary blog. According to the transcript of the conversation, Gilmour, an award-winning author who has been teaching (as a non-tenured lecturer) undergraduate courses in modern short fiction at the University of Toronto, is willing only to teach “stuff I love.” This apparently means Russian and American literature (“I just haven’t encountered any Canadian writers yet that I love enough to teach”) by middle-aged white men like him.

When the interviewer pressed him to explain why he doesn’t teach works by women writers, he answered, “When I was given this job I said I would teach only the people that I truly, truly love. And, unfortunately, none of those happen to be Chinese, or women. Um. Except for Virginia Woolf.” Then he went on to complain about Woolf being too sophisticated for his students.

It seems common for Gilmour to be questioned about his reading lists. “Usually at the beginning of the semester someone asks why there aren’t any women writers in the course. I say I don’t love women writers enough to teach them, if you want women writers go down the hall. What I’m good at is guys.” 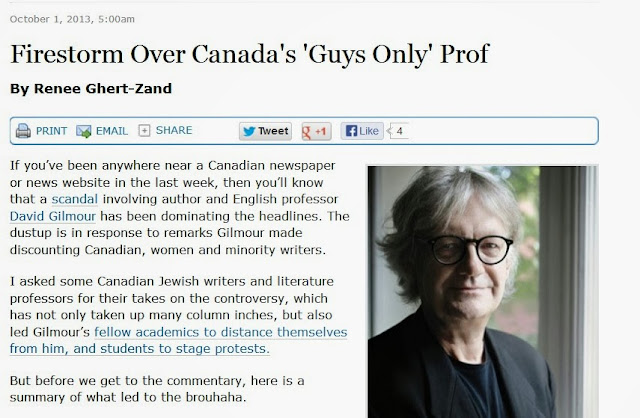 She interviewed several Canadian Jewish writers and academics, including yours truly, who was caught saying:

[Montreal writer Beverly Akerman finds Gilmour’s lack of openness to literary exploration “shocking in this day and age.” Furthermore, “there’s a real vein of misogyny there,” she says. She also finds Gilmour’s remarks bizarre in light of the fact that “Canada is famous for its women short fictions writers, like Alice Munro, Margaret Atwood and Mavis Gallant.” ]

And even gave me the last word:

[Akerman feels...at least finds a silver lining in the whole situation. “Gilmour has done us all a service,” she suggests. “We’ll all try harder now to look for and read the good female writers out there.”]

And please let me know what you think. Are you concerned? Do you think the University of Toronto has some 'splainin' to do? Are you fed up hearing about David Gilmour? Or simply fed up with David Gilmour?

Meantime, I'm starting a collection of women writers worth reading (they can even be Canadian and/or Chinese!)

Posted by Beverly Akerman MSc at 12:37