Glob & Pail on the Census: ASTOUNDING!

Your coverage of the recent census reveal is nothing short of ASTOUNDING!! John Ibbitson and your Folio pages, in particular, are textbook illustrations of how to lie with statistics.

Certainly, the growth of Alberta and Saskatchewan is notable, but news? Hardly. You stress growth rates and the West’s supposedly increased clout as a result of this, and yet sweep under the rug—if a newspaper can do such a thing!—the essential fact that Ontario and Quebec still account for two-thirds (or is it three-quarters? Who can tell, from your coverage?) of the country’s population, and will for some time to come.

Oh, and another thing that isn’t news: the gutting of corporate taxes, tariffs, import quotas, regulations, and so on—free trade, in short—is the reason we now have a “rust belt,” a diminishing middle class, and a widening gulf between society’s “haves” and the other 99 per cent. In other words, the “fall” of Ontario was engineered by the Conservative government of Brian Mulroney, and it will only get worse with this lot and their scorched earth mentality (maybe they got the idea from the tar sands). 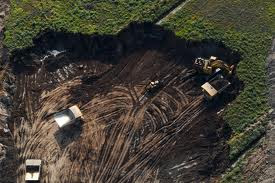 And as for the tar sands—excuse me, oil sands—Alberta Inc. is happy to ship the oil and the thousands of jobs associated with it out of Canada because our governments lack the will to ensure that processing be done here. As Jeffrey Simpson notes in his column of today, even in Alberta no one governs with the long term in mind.

If they did, they would realize that we need the oil for our own country.

PS: today marks the 25th anniversary of Michael Moore's first video camera shoot for what would become his first film, Roger and Me. In a letter marking the event, he also notes that today marks another significant milestone:

"The middle class and the American Dream were born 75 years ago today, on February 11, 1937, the day the Flint workers won their struggle [for a living wage, union, safe workplace]. And for the next 44 years, working people everywhere got to own their own homes, send their kids to college and never worry about going broke if they got sick. That belief, that life would be good if you were a good citizen and a hard worker, now seems out of reach for nearly half the country which is either living in or near poverty. Perhaps people wouldn't mind it as much if the burden were being evenly shared. But everyone knows that's not the case. In a time of record personal bankruptcies, record home foreclosures, record family and student debt, there are a group of people having the best years of wealth and profit ever recorded in human history. And it is those very people who have made the decisions to export our jobs, to decimate unions, to make college unaffordable, to start wars and to pay themselves with gluttonous joy while paying little or no tax -- this is the 1% that has created the burden so many Americans (and people around the world) now share."
Posted by Beverly Akerman MSc at 17:06