NEW: The Mysteries FREE on Amazon.com, Aug. 1st to 5th 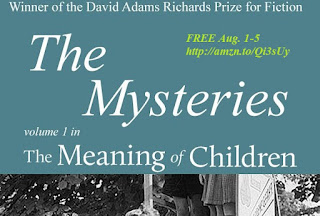 
For those with a little more time: 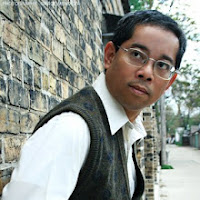 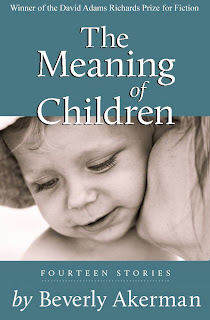 I'm trying something new to bring my book, The Meaning of Children, to more readers. The strategy was suggested (and aided and abetted!) by Samuel Peralta, award winning poet and Facebook friend, author of the amazing poetry collection Sonata Vampirica and several others, flying off the (virtual) shelves--if e-books can be said to do such a thing...

In addition to being an amazing, award winning writer, he's a shining inspiration of the indie author spirit--take advice and help as it's offered, pay it forward, pay it back...always ready with assistance and encouragement. 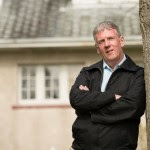 What did I do to merit such kindness? I was so affected by the personal story of e-book sensation Martin Crosbie that I wrote an article about him for The Globe and Mail, chockfull of self-publishing advice (his book, My Temporary Life, has been downloaded about 100,000 times since February. Still AMAZING, Martin!).

Coincidentally, I met both Martin and Samuel at The New Quarterly's Facebook page, if memory serves...

But, to get back to my original point, and I do have one, about my new marketing modus operandi: I've divided my book into three e-volumes, each titled for a pivotal story in the section, and will be offering them as independent e-books on Amazon. The Mysteries is volume 1 or 'Beginning', consisting of 4 stories told through the eyes of the child protagonists.

The stories are "Tumbalalaika," The Mysteries," "Broken," and "Pour Un Instant," first published in Canadian literary journals The Antigonish Review, The Dalhousie Review, Windsor Review, and The Nashwaak Review.

A few words about the story that lends the volume its name, "The Mysteries," from my first review, by Katie Hewitt in The Globe and Mail: 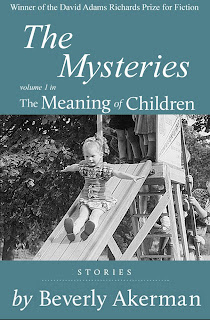 Three volumes on Amazon's Kindle Direct Publishing Select Program means three times as many giveaways! And the first one starts tomorrow, August 1st. Free, too, in the UK!


The other two volumes are Lighter than Air (six stories), and What I've Prayed For (four stories) Of course, the entire book is also still available as a single volume. (And all are also available at Amazon in the UK, France, Germany, Italy, and Spain...)


Please accept this as a personal invitation to try my book. GRATIS!

Here's the latest 5 starreview of The Meaning of Children by Amazon hall of fame reviewer Grady Harp (more recent ones here):

[Profound Vignettes of, about, or because of Children

At times chance enters our lives and we encounter moments created by a wordsmith that, like it or not, raise memories and experiences that we have either experienced, watched, heard about, or dreamed and the stories in Beverly Akerman's book of short stories THE MEANING OF CHILDREN do just that. They slowly creep into our psyches, clutch a holding place, and stay with us permanently. This collection of the whispers and screams, longings and needs of being a child and the responses of those closest to that child are the works of a magician, a writer of such substance that she is obviously headed to the top echelon of writers of our time.

Some critics are saying that this book is about the underappreciated world of women and perhaps that stance is valid: there certainly are enough tales of anorgasmia, to abortion, to preparing to say the final goodbye to a dying child to the vagaries of holding a household together despite the external (and internal) flaws that creep into crack marriages. But I don't see men being put into negative places just to serve the purpose of making a collection of stories hang together with a theme. No, these stories are all about the influence of bringing a child into the world and the benefits and consequences of the way life changes because of that. And overriding everything else is the panoply of forms of love that transcend all else.

I like the way the author (or agent or some caring one who seeks to gain our attention to this book) states it: `...a girl discovers a fear of heights as her parents' marriage unravels; a thirty-something venture fund manager frets over his daughter's paternity; an orphan whose hands kill whatever they touch is accused of homophobia; a mother of two can only bear to consider abortion in the second person; the wife of a retirement-aged professor finds him unconscious near his computer...The Meaning Of Children speaks to all who--though aware the world can be a very dark place--can't help but long for redemption.' I like this because in the end words fail in attempting to share the variety of emotions this book induces. Beverly Akerman simply knows how to write. She understands contemporary vernacular and uses it to embroider her stories, not to be `with it' like so many authors who seem to need to fill the quota of expletives. She also knows when to leave a story alone, to just let it lift itself and slip out the window, carrying the impact of our emotional changes with it.

Enough said. This is a book of rare sensitivity and masterful creative writing and must surely be shared with as many friends and fellow readers as possible.]


Finally, here's a new little book trailer I made at Animoto.com. I'd love to know what you think:

Posted by Beverly Akerman MSc at 11:21