Review of 'Malarky' by Anakana Schofield 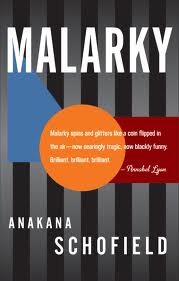 There are few things I dislike more than to be told a book is “blackly funny,” “uproarious,” and “comic,” and then not to find it so.

It makes me feel humour impaired, it does. Being as I’m a fifty-something Jewish woman who birthed three babes with narry a drop of anaesthetic till it was time for the stitches down under, you must understand why that cannae be so.

Malarky is such a book.

Thank the goddess for Graham Greene, whose The Comedians proved to me soon afterward that I am still humour intacta, to wit,


I said, ‘I’ve often heard shooting. They act more silently as a rule.’
‘Who are they?’ Mr. Smith asked.
‘The Tonton Macoute,’ the purser broke in with wicked glee. ‘The President’s bogey-men. They wear dark glasses and they call on their victims after dark.’
Mr. Smith laid his hand on his wife’s knee. ‘The gentleman is trying to scare us, my dear,’ he said. ‘They told us nothing about this at the tourist bureau.’

I can only surmise that calling the book hilarious is a marketing ploy. Or a decision taken by someone who doesn’t like middle-aged women. As a middle-aged woman myself, you will understand if I decline to be amused.

Malarky, to this reader, is not comedy but tragedy. Accomplished tragedy certainly but  tragedy nonetheless. If you’re looking for satire, I recommend the Greene… but, again, I digress.

Malarky is the story of ‘Our Woman,’ a middle-aged frump, from the sound of it, who lives in Ireland with Himself and her boy Jimmy. In short order, she comes across her son in flagrante delicto with a young man from the neighbourhood.


The shock takes her to a squat.
A sunken squat.
An utter of shock.
Before she moves quietly off, she takes another look. She has to see it again.
They’re still at the same malarky. It’s her son, her boy, and he’s shaking himself stronger against that young fella. He cannot bury himself deep enough in him. Flagrant; he’s got him by the hips, rattling in and out of them, almost like he’s steering a wheelbarrow that’s stuck on a stone, going no place.

In short order, Red the Twit comes up to Our Woman in a bar and reveals she has been sleeping with Himself.

Our Woman’s world is rocked by these events.

Are you laughing yet?

Our Woman then goes on a strange voyage of discovery that engulfs a local shop security guard of Syrian origin, and attempts to recreate the sex scenes of Jimmy’s she has witnessed. To bedlam and back.

For anyone who needs a demonstration why beginning writers are admonished against using multiple points of view, Malarky can be read as a textbook. Still, despite zooming between first and third person versions of Our Woman—whose name, we finally discover, is Philomena—Malarky works.

Malarky works because sometimes we must bear tragedy but still needs find some way of distancing ourselves from it.

Malarky is also a textbook example of the “what if” story: what if you were an Irish farmwife, minding your own business, pouring the tea, doing the endless cooking, cleaning, and ironing, only to find out your son, the only child of your three you were close to, is gay? Knowing this would create an unbridgeable schism in your family, with Himself being the way he is.


I expected more from you, Jimmy said. His father he could understand, but you, I thought you got it.
I do, I wanted to tell him… but… I married the man. I married a man and if you marry one, this is what you do. You organize the things that disturb him. I wanted to tell him to be careful if he marries a man. There are things to worry about when you marry someone.

And, oh yeah, Jimmy’s father’s been cheating on you. Even though “their lovemaking” has been sporadic, “every few months, maybe longer,” this rutting rut has still been part of the bedrock of Our Woman’s life.

What if the comfortable life you’d built for yourself—not luxurious, mind (after all, the entire countryside’s been blindsided by the economic collapse), but built on the certainty that was supposed to come with hard work—is turned upside down in a few short episodes?

Would you go a bit mad? You would.

Would you fight back? Become, in the words of Lynn Coady’s book blurb, “a sexual outlaw/anthropologist”? You might.

What if Himself cuts the boy off, the boy leaves school for the army—the American army—and gets himself killed?

What if your life was bulldozed like this? And then, both men died?

How would you feel? Hilarious? What blarney. That’s Malarky.

Now living in Vancouver, Schofield is an Irish-Canadian writer of essays, fiction, and literary criticism. Her credits include the London Review of Books, The Recorder: The Journal of the American Irish Historical Society, the Globe & Mail, and the Vancouver Sun. Malarky is her first novel. She worked on it for ten years.

Malarky is at times strange, and less focused in the latter third. But it is utterly filled with the wisdom—the tragedy, respect, and the sheer determination–of the middle-aged woman. There are also some marvellous lines. For example, this: “The thing people don’t realize about patchwork women like me is how given to exasperation we are.”

Read the book: to honour the middle-aged woman, not to laugh at her.