Lest We Forget: the Cowardly Assassination of Pierre Laporte 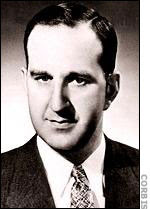 October 17th, 2010 marked the 40th anniversary of the assassination of Quebec’s Vice Premier and Labour Minister, Pierre Laporte, by Paul and Jacques Rose, the cowards of the Front de Liberation du Quebec. Rest in peace, M. Laporte. We can never repay your sacrifice...or that of your wife and children, and the widow and children of your late brother Rolland, all of whom you were supporting at the moment you were abducted from your St. Lambert home by a bunch of pathetic pseudo-Marxists who had taken leave of their senses after watching too many screenings of The Battle of Algiers.

Paul and Jacques Rose, driving to Texas to buy guns for the cause, were surprised to hear of the kidnapping of British trade commissioner James Cross by their FLQ Liberation Cell brothers on October 5th, 1970. They raced back home and grabbed you as you played football with your nephew. You, M. Laporte, who had been a journalist with Le Devoir from 1945 to 1961, determined to best the tyrannical Premier Maurice Duplessis. You, M. Laporte, who had been part of Jean Lesage’s Equipe de tonerre, who had helped to roll back la grande noirceur and ended up falling victim to its newer iteration. Who were these angry nobodies who had never done a thing to advance the people of Quebec, who confused the blowing up of mail boxes with positive political action?

I feel like I am writing the most important letter I have ever written.

For the time being, I am in perfect health, and I am treated well, even courteously.

In short, the power to decide over my life is in your hands. If there was only that involved, and the sacrifice of my life would bring good results, one could accept it...

You know how my personal situation deserves to draw attention. I had two brothers, both are now dead. I remain alone as the head of a large family that comprises my mother, my sisters, my own wife and my children, and the children of Rolland of whom I am the guardian. My departure would create for them irreparable grief, and you know the ties that bind the members of my family...

You have the power of life and death over me, I depend on you and I thank you for it.

What would you think of the Quebec of today, a Quebec which virtually ignores your murder, a Quebec where a goodly number have convinced themselves the entire FLQ episode was some kind of federal conspiracy to discredit the independence movement? As if the independentistes needed any help in that regard, the truth being that some of the most revered of the separatists—their sainted Rene Levesque and his bombastic sidekick Jacques Parizeau—took advantage of the uproar caused by the kidnappings to talk about planning the “provisional government” of Quebec.

But Messrs. Levesque and Parizeau weren’t alone in mistaking their duties: as media analyst Raphael Cohen-Almagor later concluded, the media coverage of the crisis was a textbook example of irresponsible journalism in Quebec.

Influential segments of the French media served the interests of the terrorists and ignored the interests of the victims, as well as the interests of Canada as a free, democratic society. Journalists broke almost every ethical norm that is accepted during hostage-taking episodes; they did not hesitate to sensationalize and to dramatize the event, stirring up emotions in a way that hindered governmental operations...They gladly offered their services as mediators and messengers of the terrorists, disregarding their obligation to accurate reporting, and broadcast the terrorists' communiqués without the consent of the authorities. Through their extensive sympathetic coverage, French journalists not only provided a grand platform for the terrorists, but also legitimized their demands and actions...

And this media mischief and misinformation continues: a Radio-Canada documentary just days back repeats the lies that your murder was “accidental” and in fact the fault of the police, since you were supposedly still alive when they deposited you in the trunk of that car for the police to find (this despite the fact that the communiqué issued at the time spoke very plainly of your “execution”). And, the Felquist apologist continued, if a communiqué from Cross’s kidnappers, addressed to the numbskulls who held you, and urging you not be harmed, hadn’t been suppressed by the police, you would have been fine.

Oh, M. Laporte, to think, if only the police hadn’t been so devious, you might have lived…is it only in Quebec people lie to themselves this way?

Instead of bowing our heads in collective sorrow at the fact that you were strangled with your own religious medallion—surely a torturous and agonizingly slow method of execution!--the Quebec’s news media today celebrates instead the canonization of Brother Andre, the illiterate “man of the people” who “cured” the sick by anointing them with oil.

And the pathetic apologia for your kidnapping and murder—and the murders of 5 others, as well as the kidnapping of Mr. Cross—continues, as one of the authors of Quebec’s high school history text declares the FLQ never meant to hurt anyone. This despite their having perpetrated in excess of 200 violent crimes--including at least 100 bombings--that resulted in the deaths of six people!

But luckily for this next generation, according to history teacher and textbook author Raymond Bedard, the Quebec curriculum does not put a lot of emphasis on the October Crisis, perhaps 45 minutes of class time out of the entire school year.

They say those who forget history are condemned to repeat it. Dear M. Laporte, I am glad that, for you at least, that cannot be so. I wish you godspeed. You didn't deserve the treatment meted out to you. You didn't deserve it then, and you still do not now.

Raphael Cohen-Almagor. The scope of tolerance: studies on the costs of free expression and freedom. London: Routledge 2006. p.235

It's probably a rare person who actually enjoys being “defriended” on Facebook, but I don’t feel any shame in explaining how it happened to me recently. Albert somebody-or-other, a self-proclaimed Laughologist and inventor of Laughercize, with the click of a button, excommunicated me from his exalted circle. Fair enough: it’s his party and if I’m not invited, I think I can still manage to live a happy life. But the reason I was banished from the warmth of his virtual embrace bothers me, so much that I feel obligated to share it.

A few days back, under the heading “It is possible to have too much fun,” Albert posted this video

“pole dance no casamento”; the last word means “wedding” in Portuguese; another version I found intimates it dates from November 2009 (I tried to discover if it was a fake or urban legend at Snopes; it isn’t there, so maybe it is real).

The 1 min 31 sec clip shows a wedding reception, held in a large tent, if the beribboned pole in the foreground is anything to go by. The camera pans out over the tables, and we see we are indeed at an outdoor wedding, under a large white tent. A long-haired woman in a red sequinned dress, lots of back showing, dances around somewhat hedonistically, a wineglass in one hand, the large pole in the other. The bride, in the background, doesn’t look too amused (leading me to wonder if the entire deal has been staged, for some reason—like, maybe to garner a million youtube hits). Within seconds, red dress is dancing with a man (likely the groom); bridey looks even less pleased, being upstaged by red dress’s dirty dancing AND having groomy snatched away from her. And then the scarlet woman goes back to the pole, swings around it a time or two more, and...MANAGES TO PULL IT DOWN!

Mayhem ensues, people crawling over the grass, young guests comforting each other. The last image is of bridey, on the ground, being offered a folded handkerchief to staunch the bleeding from her nose.
Albert posted the video and “liked” it himself. I added, “didn't i see this in that sandra bullock movie '28 days'? actually, this is worse: in the movie, there wasn't a bloodied bride...moral: beware a woman in a red dress (i guess).”

But then I get to thinking about the episode, taken as a whole. And I start to realize it really ISN'T funny…

The rest of our exchange plays out like this:

Albert Note the Bride seems to be glaring at dancing woman as if to say "that woman is going to ruin my wedding." She was right!
Me yes, i did notice that...wasn't it because red dress started dancing with the groom?
Me but Albert, i fear anyone laughing at this has an unfortunate lack of empathy. and just such a spectacular lack led last week to the tragic death--by suicide--of Tyler Clementi.
Albert Beverly. You're way off. This is darkly funny.
Tyler is a completely different story. Don't know why you would connect the two.
Me it's funny only if it isn't a real wedding. if it's a real wedding, it isn't funny. why can't you see that?
Albert Still no connection. People laugh naturally at a lot of things. Some of them rough. This is still funny. Bride was not seriously injured…
And this is where Albert and I part ways: I feel the sight of a woman bleeding anywhere—much less at her own wedding, for God’s sake!—is not funny!

Days earlier, Tyler Clementi, the unfortunate 18 year old Rutgers student caught on streaming video having sex with another man (twice!) by his roommate and the roommate’s friend, had committed suicide by jumping off NYC’s George Washington Bridge as a result of this cyberbullying. The Facebook memorial page “In Honor of Tyler Clementi” is available here.

So, good people, I put it to you: is this wedding crashing video funny or not funny?

Funny only if it is a set-up, a fake? To me, conceivably. Funny if it’s the real thing—that is, a wedding at which a drunk or otherwise-overly-enthusiastic person pulls the house down and the bride ends up bloodied?

For the life of me, I just can’t see it.

And let me know if you perceive a connection between the pronouncing of this video funny and the astonishing lack of empathy—not to mention boundaries—demonstrated by Rutger students Dharun Ravi and Molly Wei, also both 18 years olds. To me, it's all the same empathy continuum.

If you want to see the modern faces of heartlessness, here they are:

And, while I'm asking the questions and you're furnishing the answers, please tell me: is this the legacy of a decade of the idiocy of shows and movies like “Jackass” and its ilk--Beavis and Butthead, Fubar, Futurama, The Simpsons, Harold and Kumar, Paul Blart: Mall Cop, Borat, Uncle Buck, Ace Ventura: Pet Detective, Deuce Bigelow: Male Gigolo, and on and on--a generation that can't tell the difference between a joke and destroying someone's soul?
Posted by Beverly Akerman MSc at 12:49 No comments: