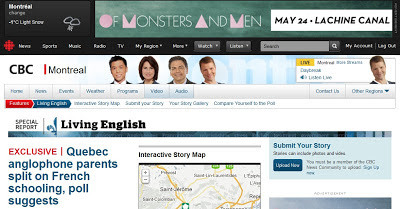 Just thought I’d let you know of my appearances on CBC Radio’s Daybreak last week and CBC TV News, discussing whether or not English-speakers feel welcome in Quebec. It was part of their ongoing “Living English” series, covering results of an EKOS poll on Anglophones in Quebec.

You can listen to the interview here:

To come: I was interviewed for a segment on CBC Radio's “C’est la vie.” I think it will be out this week.

Big thanks to Mike Finnerty, Joanne Vrakas, Alison Cook and all their researchers and associates. An inspiring group who are always trying to do more with less.
Posted by Beverly Akerman MSc at 08:19 No comments: 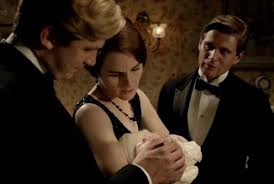 Last week's death of Sybil Branson, youngest daughter of Lord and Lady Crawley, reveals the deepest themes of this third season of Downton Abbey, and the series as a whole. The episode ended with the shocking convulsions after Sybil has birthed her bairn, the newest generation of Crawleys. (It isn't a strictly accurate portrayal of eclampsia, which remains a problem in pregnancy even now, ill understood and incurable, except by monitoring and early delivery at the earliest signs).

This week's pivotal scene takes place in Cora's bedroom when, blaming Robert for having insisted Sybil be treated as advised by the society doctor he'd engaged, tells him it's too soon for him to return to her bed.

And here is the clash of America vs. Aristocracy: Dr. Tapsell was "knighted and has a fashionable practice on Harley Street" while reliable country doctor Clarkson, who had counselled an emergency c-section hours before the delivery, was only the uber-reliable country doctor who had known the young woman for her entire life. A man of lower stature but greater knowledge--in this case, devolving to something as mundane as knowing that Sybil usually had slender ankles.

"You let all that nonsense weigh against saving our daughter's life. Which is what I find so very hard to forgive," actress Elizabeth McGovern sniffles.

Again and again across the series, we are confronted with Sir Robert, the benevolent slightly buffoonish one lord to rule them all, making decisions that, despite their impressive decisiveness, end up going south (e.g. losing Cora's entire fortune with one bad investment, which he was counselled against), and this episode is no exception.

He behaves insufferably over son-in-law Branson's wish to raise the baby as a Catholic. Robert balks, and has the temerity to invite Mr. Travis, the local Church of England vicar, round to dinner to dis popery. This is truly shocking when we take into account that a), Tom is heartbroken over the loss of his wife, for goodness sake, and b) that by the moral code of the Crawleys, surely importing a guest to insult a family member at table "simply isn't done." It demonstrates something that, to this crew, is clearly among the worst of all faux pas: bad manners.

When Mary confirms Sybil's intended the baby to be baptized Catholic, Robert is "flabbergasted." Cora says, drily, "You're always flabbergasted by the unconventional."

Robert seems blind to how inconsiderate he is being, blundering about like an injured bull, and demonstrating his increasing unfitness to lead.

Meantime, downstairs, a parallel story plays out with Carson the butler, who forbids any member of the staff having dealings with Ethel, the fallen maid, who has resurfaced as Isobel Crawley's new cook and housekeeper. Ethel, you may recall, while working at Downton, was seduced by an officer convalescing there during the war. Immediately dismissed, she ended up having a child out of wedlock and was forced into prostitution to support them. Ethel had given up her son to a better life with the now dead officer's parents and, latterly, been taken in by reformer Isobel, who hopes to help her overcome her degradation. In other words, Ethel's path to ruin happened on Carson and the Lord's watch, yet all they did was blame her for her misdeeds, and shame and humiliate her. Another among many shocking indictments of the social conventions of the Victorian era.

When Isobel suggests a luncheon for the Downton "girls"--"does that include me?" warbles the Dowager Duchess--the stage is set for the confrontation: between the men and the women, between creaky notions of propriety and the ancient concepts of mercy, made modern in the guise of rehabilitation. Thank God, mercy wins.

Mrs. Patmore agrees to help Ethel with a menu and cooking pointers (Mrs. Hughes has been defying Carson's edict by helping Ethel out for years). And when Robert storms into the luncheon, demanding his women--Cora, the two daughters, and his mother--leave immediately, Cora refuses. And the women stay put. "It seems a pity to miss such a good pudding," the Dowager offers by way of explanation.

The leadership upstairs and downstairs is gradually being chiselled away by the growing strength and enfranchisement of the women, and the mounting irrelevancy of Victorian social conventions. That is my read on the real message of Downton, though it be swathed in melodrama.

And the ultimate proof of this, which I realized most clearly after watching the end of season shocker, is telegraphed by the opening credits: they're alphabetical. Not "starring" this one and that one. In other words, no member of this cast is to be considered above the others. Sir Julian Fellowes demonstrates by metaphor in the very first moments of the program, that he thinks it best to treat all his actors equally.

Downton Abbey: social history writ small, wrapped in melodrama, and high production values. But make no mistake, the values here are not simply of production: they are social values, resonant and real, and so is the historical backdrop. And that is the lesson of its exploding popularity, what propelled it to the top of the TV drama heap worldwide, and why we keep watching.

A version of this post originally published on The Huffington Post Canada
Posted by Beverly Akerman MSc at 19:00 No comments: