Welcome! A bit about me and this blog... 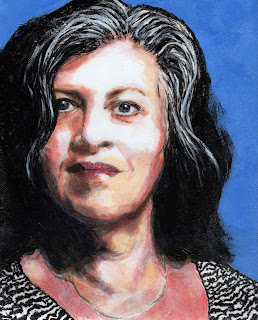 After over two decades in molecular genetics research, I finally realized I'd been learning more and more about less and less! Skittish at the prospect of knowing everything about nothing, I turned, for solace, to writing, and began winning awards for my prose. More recently, I've turned to painting; you can find examples of recent work here, here , and here . Commissions welcome!

My first book, The Meaning Of Children, was released in Canada by Exile Editions. It made the Top 10 list for the CBC - Scotiabank Giller Prize Readers' Choice Contest, longlisted for The ReLit Award and made Salty Ink's Top 10 Canadian Books of 2011 Short Fiction. Over 20 of my stories have appeared in anthologies and literary magazines.

My monologue "Chelle" was brought to life by the incomparable Nan Fewchuk at Winnipeg's FemFest 2010: On the Edge, a feminist theatre festival put on by Hope McIntyre's Sarasvati Productions.

Other honours include Pushcart Prize nominations in fiction and nonfiction, Professional Writers' Association of Canada's Short Articles Award, and the David Adams Richards Prize from the Writers' Federation of New Brunswick for my fiction collection The Meaning of Children (judge JoAnne Soper-Cook said the most amazing things about it).

My nonfiction and academic work have appeared in such well-known Canadian venues as Maclean’s Magazine, The Toronto Star, The National Post, The Hill Times, The Montreal Gazette and CBC Radio One (Canada’s NPR-equivalent), as well as in numerous lay publications and learned journals.

A life-long Anglo Montrealer, I live with my husband (we're now officially empty nesters!) in a sort-of suburb--20 minutes from downtown--called Notre Dame de Grace, or NDG among the cognoscenti. Of course, wags sometimes say NDG stands for No Damn Good...but who cares what they think, anyway?

It pleases me strangely to believe I'm the only Canadian fiction writer to have sequenced her own DNA.

Welcome and please feel free to drop me a line.