Much of CanLit has been in a tizzy the past couple of weeks, fulminating over issues surrounding Steven Galloway's suspension—later dismissal, without severance--from his post as head of creative writing at the University of British Columbia.* According to media reports, complainants accused Galloway of sexual assault, sexual harassment, inappropriate behaviour, threats, favouritism, and bullying.

The dismissal followed a months-long investigation by former BC Supreme Court judge Mary Ellen Boyd. Though not all complaints were deemed founded, UBC’s then-president Martha Piper met with Galloway, considered the dean's recommendation and Boyd’s findings, and concluded “a record of misconduct” existed “that resulted in an irreparable breach of the trust placed in faculty members by the university, its students and the general public.”

In other words, he comported himself in a manner unbefitting a UBC professor.


In the hysteria following the UBC Accountable letter, an earlier incident demonstrating Galloway’s unfitness for his position appears to have been forgotten. I was hardly surprised, nearly two years later, to hear he’d been suspended and subsequently fired.


As Maya Angelou said, “When someone shows you who they are, believe them the first time.” 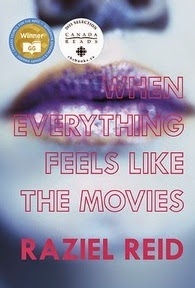 After Raziel Reid’s When Everything Feels Like the Movies won the $25,000 Governor General Literary Award for Children’s Literature (Text) in 2014, some voiced their concern the book was inappropriate for young adults; so inappropriate, they petitioned the Canada Council to reconsider the award. Prominent early critics of the book were award winning author Kathy Clark (first signatory of the petition) and columnist and author Barbara Kay.

I am a strong supporter of the freedom of speech and the petition does not suggest censoring the book. It states that this is not quality literature and should not be rewarded as such. Raziel Reid is free to write what he wants, and I actually commend him for his intentions…

Did WEFLTM really qualify as YA lit? Even CBC didn’t seem to think so, assigning it to the adult Canada Reads competition.

But if one thought it was undeserving of an award, what could be more Canadian than starting a petition in protest? Is it different from writing a letter protesting a university’s handling of a personnel matter?


Reasonable people can differ in their opinion of whether a book merits a children's literature award or YA designation. But Galloway's rejoinder to Clark was anything but reasonable:

I am writing to let you know that your attack of [sic] a fellow writer is disgusting. You may not agree with the content of his book, but if you don't value free speech and think that transgendered [sic] youth have a place in literature, and if you don't understand that your viewpoint is not absolute and privileged above other voices, then you don't deserve to call yourself a writer... here in Canada we don't censor literature...I am ashamed of you, and ashamed to share a profession with you. [Facebook]

Elsewhere, he mentioned that writers he’d spoken with shared “a mixture of support for [Raziel Reid], the desire to forcibly extract Ms. Kay and Ms. Clark’s heads from their rectums, and shame that we are actually having to have a freedom of expression debate in 2015.”


Was this grab bag of insults the way a mature adult handles a difference of opinion? Hardly. This was the hyperbolic language of the social justice warrior, a twining of bullying and ad hominem attack. This was Steven Galloway as pitbull, demonstrating beyond a reasonable doubt that UBC erred in elevating him to head of creative writing.


Where is the moderation one should expect of a professor and university leader? Where, even, is an understanding of the term “censorship,” which could reasonably be expected of a person in his position?


Censorship, as I imagine most thinking people comprehend it, arises when those in authority withdraw a book from publication, remove it from schools or libraries, burn it, or otherwise prevent people from reading it. Only a fanatical ideologue imagines petitioning a granting agency to reconsider an award to be censorship.


In a lengthy** public Facebook conversation with me on January 29th, 2015, Galloway finally accepted Clark, Kay, and the petitioners, in his words, “have a right to voice their dislike of the book. They also have a right to ask the [Canada Council] to revoke the prize.”


What Galloway would not reconsider was his essential position: disgust and attack. He again assaulted Clark and Kay’s “privilege,” calling them “a couple of elderly women who have no real standing in the world outside of a small, insular bubble,” accusing Kay of “delusion bordering on psychopathy,” and capped his remarks to her with: “You have a newspaper column. I or any one of a number of other people I will see this week could also have such a thing with one phone call. We wouldn't even need our son to be on the editorial board.”


In sum, my contention is that Steven Galloway’s racist, sexist, and ageist insults over the Reid book protest revealed that by 2015, he was clearly unfit to head a university department. Given his propensity for shooting off his mouth, I suspected his dismissal was only a matter of time. Seeded from his own nature.


Read all about it in the dictionary, under the word “hubris.”

* The university may have erred in implying they suspected sexual assault. However, given the recent history of events on campus (see here and here), perhaps they were finally attempting to put protecting potential victims first. What would you have them do when an illustrious professor was accused in this way? The complainants must have been pretty credible, to merit the independent inquiry that followed.

**My pdf transcript runs to 17 pages.

Posted by Beverly Akerman MSc at 17:30 No comments: