Self-publish your way beyond obscurity

To give away or not to give away, that is the question 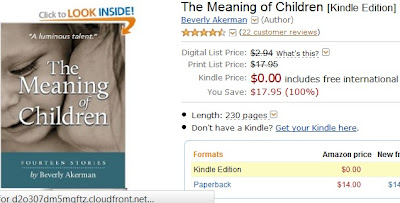 I’ve decided to give away the e-version of my award-winning collection of short fiction, The Meaning of Children  - well, for a couple of days. The paperback, released in 2011 by Exile Editions, officially sold about 365 copies. At $2 per $19.95 list priced copy, I’ve earned about $730 in royalties from Exile’s publication, which doesn’t include the proceeds from the approximately 200 copies I hawked myself, or the $150 they paid me to publish one of the stories in Exile Quarterly. Somebody else—many somebodies—pocketed the remaining $12 to $18 per copy…or over $6500.

The economics of publishing, especially considering the hours put in writing, editing, re-writing, etc. are enough to make a grown writer weep.


In March 2012, posting on The New Quarterly’s Facebook page, I encountered Martin Crosbie, self-published sensation, Amazon.com poster-writer who earned $45,000 in royalties in February 2012 alone. I decided to self-publish the Kindle version of my book (to which I had luckily retained the rights).

It cost me nothing to self-publish (except for the commissioning of a new cover; Exile wouldn’t let me use theirs) and took about five minutes to accomplish. The self-published ebook, available exclusively on Amazon since March 2012, has been downloaded nearly 7,000 times. From this, I’ve earned about $500. So far.

I also wrote an article about Martin’s success and contrasted it with my own (“How to become an e-book sensation. Seriously”), published in The Globe and Mail Books section. The article was in the top 10 for its section for months.

As Martin and other successful indie writers, notably Robert Bidinotto, stress, the key to generating interest in your self-published book is to use Amazon’s Kindle Direct Publishing’s primary promotional tool: five free giveaway days per three-month period your book is exclusively available with Amazon.

The point of exclusivity? The free days, and the opportunity to be paid for allowing them to lend your book to their huge bank of subscribers, Amazon Prime members. For an annual fee, Prime members benefit from a number of advantages, including borrowing a book a month from the KDP collection. Some authors generate mucho dinero from these loans, especially genre writers: because genre readers need their fixes real regular-like. Over $2 per borrow, on average. For Martin Crosbie, this translated to thousands and thousands of downloads and dollars.

Giving away your book is an indispensable promotional tool. Many websites, Twitter accounts, and Facebook pages exist primarily to promote freebies. And thousands of free downloads rockets your book up the Amazon sales charts, which piques reader interest, generates those all-important reader reviews, and results in subsequent sales. Hopefully.

As Martin told me, “The rule of thumb is: For every three you give away, you’ll sell one. So give lots away!” Indie authors must be open, generous and giving. Remember, we’re channelling Oprah here.
Despite my modest success with self-publishing, I don’t suggest litfic writers take this route: my book won prizes (many prior to the book’s publication, and a couple, e.g. the J.I. Segal Award, as a result of being traditionally published). The traditional routes to recognition and sales—newspaper and magazine book pages—are sadly still unavailable to self-published authors. Of course, there’s a reason for this: many self-published books are pure dreck.

In any event, if your self-published book doesn’t manage to do as well as Martin’s My Temporary Life, you can always tell yourself it’s because

b. Amazon has changed their algorithms.

Beverly Akerman’s The Meaning of Children hit #1 on Amazon's Kindle Women's Fiction, Literary Fiction, & Short stories lists in her most recent giveaway (Nov. 2013), rising to #51 on their list of over 1 million books.

This article originally published on Montreal's arts and culture online magazine, The Rover.
Posted by Beverly Akerman MSc at 09:24 1 comment: