Who the hell’s “Version” is this, anyway?

In my last post, I confided how much I was looking forward to seeing the film adaptation of Mordecai Richler’s Barney’s Version. Yesterday, I actually put my money where my mouth is. Now all I can say is, be careful what you wish for.

I knew from earlier reviews that many attributes of the book that had most amused me—particularly its skewering of Quebec nationalist politics and Canadian cultural nationalism—had been left out. I was philosophical about this: after all, turning a 417-page, four-decades epic of one man’s life into a two-hour film demands some streamlining.

But there’s streamlining and then there’s the hatchet job, and I’m sorry to say, despite the smattering of applause from the nearly-full auditorium at its conclusion, Barney’s Version the film is more like the latter.

To mix metaphors a bit, it seems that the delicate artistic balance of the novel has been destroyed in this new “Version,” and this drunken lurch is nowhere better demonstrated than in the film’s treatment of Jews and women. And Jewish women, in particular.

Barney’s Version the novel is the fictive autobiographical confession, “the true story of my wasted life.” It has a largely tripartite structure, with books based on each of Barney Panofsky three marriages.

Now the triangle is an ancient, mystical, and frustrating form—just ask any teenager struggling through trig 101--and still holds great attraction to us today—as morbid interest in Aniston, Pitt, and Jolie, Charles, Diana, and Camilla, or the Father, the Son and the Holy Ghost, demonstrates. In Barney’s case, though, these three wives are in no way a triangle: they are guideposts in the life of a man on a mortal journey, searching for meaning and love. (Hmm, perhaps more like the Father-Son than I thought…)

The first Panofsky wife is Clara Chambers (actually Charnofsky), the hedonist of his youth, a first class f*cked up bitch. In the book, she is a talented artist whose modest genius is hugely inflated by the feminist commentary that grows around her suicide—a knock-off of Sylvia Plath, with Barney cast as Ted Hughes. In the movie, Clara’s (Rachelle Lefevre) talent is not discussed and the fame that lives on after her, redacted. Not so Clara’s father, played by Saul Rubinek1, who appears on the heels of her death as a bearded Orthodox Jew, unmasked in short order as another in the long line of Richler’s nasty Jewish characters.

The second Mrs. Panofsky, an archetypal loudmouthed yenta of a Jewish American Princess, is brayingly brought to life by the incomparable Minnie Driver—who really should have been cast as Miriam, the third in Panofsky’s marital hat-trick.

Driver is beautiful, a great actress, and she looks plausibly Jewish…which brings me to the crux of my beef with the liberties taken with this celluloidization of a novel: in Richler’s version, Barney’s third wife is Miriam Greenberg, clearly a Jewish woman who, as I wrote in my earlier post, drives a stake through the shiksa goddess motif favoured in novels by Jewish men of a certain age and stature (and not just of a certain age either; the all-round repulsiveness of the Jewish woman is still common cultural currency, as throw-away lineslines2 in The Social Network demonstrates). 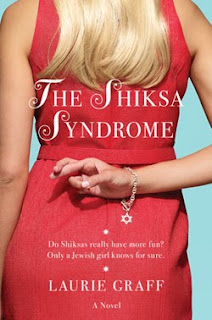 If you need examples of the shiksa goddess, think Cybill Shepherd (in Tootsie); if you need a fer instance of the opposite, please see this description of Sophie Portnoy of Portnoy’s Complaint. Then there’s most of Richler’s earlier oeuvre (e.g. the lovely Gabrielle Lazure as Pauline Shapiro contrasted with the odious Esther, Joshua’s mother, played by Linda Sorenson, in Joshua Then and Now).3,4

But in this film, Miriam Greenberg morphs into Miriam Grant (played by the luminous Rosamund Pike) and, to emphasize the point, this stylish, classy and sexy shiksa’s wedding ceremony is concluded by a man wearing neither head covering nor tallit, is clearly a non-Jewish one (driven home by the phrase, “I now pronounce you husband and wife.”)

Now, these are by no means the only flaws with this film—it seems to forget the murder-mystery plot line for what might have been an hour, it should have included voiceovers with Barney as he wrote his confessional (rather than the stilted info dump conversations it employs instead), and the resolution of the murder is so heavy-handed, it appears aimed at imbeciles (with apologies, of course, to imbeciles). Also, Barney’s paunch in his 20s is almost as noticeable in his 60s. Which brings us to another eternal motif in the story, that of Beauty and the Beast motif (which was, apparently, according to Charles Foran, how Richler referred to his relationship with his beloved wife Florence).

Recasting Miriam Greenberg as Miriam Grant resurrects the shiksa goddess, just when I finally thought it was safe for this Jewish woman to head back to the movies. Unfortunately, plus ça change, plus c'est la même chose.

So I guess my question is, whose odious version of Jewish womanhood is this? Screenwriter Michael Konyves’, producer Robert Lantos’, or director Richard J. Lewis’?

To be fair (and really, this comment comes 7/8 of the way through my review, so how fair could it be?), this Montreal audience appeared to love the movie, the trip down memory lane (though how COULD they have left out Duddy Kravitz’ final hurrah?), the talented ensemble cast, Dustin Hoffman’s mastication of the floorboards, etc.

Had they read the book? Did they remember it if they had (the book having been published in 1997)? Or maybe they felt the film’s poignant finale was enough for them, that 75 per cent of Barney was close enough to the mark.

As A.O. Scott puts it in the New York Times,

In spite of Mr. Giamatti’s ferociously energetic performance “Barney’s Version” never figures out just who Barney is. In Richler’s pages he is above all a voice — profane, sophisticated, tender, mean and funny — and the filmmakers prove unable to compensate for its absence…in attempting to honor the spirit of the book, they extinguish it. It is a wild, unruly novel of character, in which the character himself is at once incorrigible and irresistible. The film tames and sentimentalizes him, and in showing respect for Barney’s author turns his creation into something unforgivably respectable.

Harsher judgement than my film attending confreres and consoeurs. But I agree with Scott: the problem with this version of Barney is that we have no idea WHAT these three women could possibly have seen in him...of course, we do know what Clara saw, and even the second Mrs. P (who is so odious, she never even merits a name!)...but what could the luminous, perfect redeeming wife have seen in him? Frankly, in this version, that's a bigger mystery than Boogie's disappearance.

But finally, I guess I still have to say that I’d rather have this Barney than no Barney.

1 Irony of ironies, Rubinek was born in a refugee camp in Germany following WWII…both film and book skewer Jewish community fundraisers who use the threat of another Holocaust after every publicized local grave desecration or incident of swastika tagging as a fundraising opportunity. Which makes Barney’s Version (the movie) exhibit A for scholars like Jenny Peto.

2 From a blog post titled "Is The Social Network's Asian Fetish Acceptable":

Dustin: I’m developing an algorithm to define the connection between Jewish guys and Asian girls.

Eduardo: I don’t think it’s that complicated. They’re hot, they’re smart, they’re not Jewish and they can dance.

4 For what it’s worth, I feel compelled at this point to admit that my long-term marriage—my one-and-only—is to a man who wasn’t born Jewish (but who converted after we’d been married 6 years). My parents could never afford a house in Cote St. Luc when I was growing up, but I do have a Master’s degree (my hubby, very accomplished in his own right, does not…note to self: must ask how often I rub his nose in this…)

Posted by Beverly Akerman MSc at 18:26