As described in The Globe and Mail today, Marina Nemat has responded to Anne-France Goldwater's comments, and Me Goldwater has also defended her own position.


It seems clear that Goldwater read reports that others had denied the veracity of Nemat's account, especially of the near-death experience.


Who knows the truth of Nemat's experiences? You'd think people had never heard of fabrication in journalistic or memoir circles! It isn't that far back that James Frey created a sensation with A Million Little Pieces: 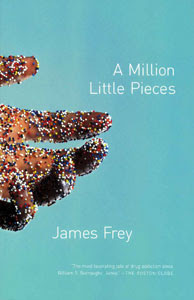 "On January 8, 2006, The Smoking Gun website published an article: "A Million Little Lies: Exposing James Frey's Fiction Addiction" alleging that Frey fabricated large parts of his memoirs, including details about his criminal record.[6] One incident in the book that came under particular scrutiny was a 1986 train-automobile collision in St. Joseph Township, Michigan.[7]

The website alleged that Frey had never been incarcerated and that he greatly exaggerated the circumstances of a key arrest detailed in the memoir: hitting a police officer with his car, while high on crack, which led to a violent melee with multiple officers and an 87-day jail sentence. In the police report that TSG uncovered, Frey was held at a police station for no more than five hours before posting a bond of a few hundred dollars for some minor offenses. The arresting officer, according to TSG, recalled Frey as having been polite and cooperative.

The book's hardcover (Doubleday) and paperback (Anchor Books) publishers initially stood by Frey. But examination of the evidence caused the publishers to alter their stances. They released a statement noting, "When the Smoking Gun report appeared, our first response, given that we were still learning the facts of the matter, was to support our author. Since then, we have questioned him about the allegations and have sadly come to the realization that a number of facts have been altered and incidents embellished."[8] As a consequence, the publishers decided to include a publisher's note and an author's note from Frey as disclaimers to be included in future publications.[9]"
----
Then there was the story of journalist Stephen Glass, who "who came to prominence when it was uncovered that he had fabricated several magazine articles in 1998."

And then there was the story of Janet Cooke and "Jimmy's World"...

What amazes me: in Nemat's Globe and Mail response to Goldwater, she goes on and on about AFG denying the torture. To the best of my recollection (and you can watch the podcast yourself, I believe the fireworks start somewhwere around 33 mins in), Goldwater never said WHAT it was she found hard to believe...and Ghomeshi never pushed her to do so, either.

It isn't impossible that some of the events Nemat recounted are inaccurate...but frankly, that is beside the point, IMHO.

My main issue is that those who invited Goldwater to appear on Canada Reads did so knowing full well that she is a shark not a chihuahua.

At least, they should have known.

They must have hoped for a brouhaha...and they got one.

Was Goldwater a bully? Should Ghomeshi have demanded she provide at least an example or two of the statements she found hard to swallow? After all, he HAD noted how detailed her annotations were!

For me, the bottom line is that Canada Reads is a 'battle of the bands concept' applied--simplistically applied!--to books.

One thing is sure:  Nemat can now ride her outrage and high dudgeon all the way to the bank.
Posted by Beverly Akerman MSc at 19:32