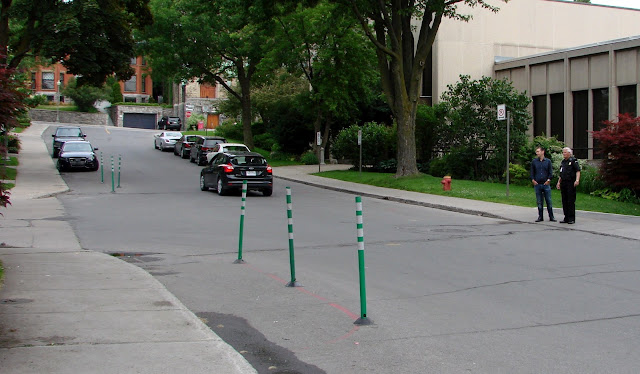 Aaron Akerman stands near the Metcalfe/Springfield intersection where he was hit by a car on May 22nd. With him is Alex Kuczma, part of the security team at Shaar Hashomayim/Akiva School. Green plastic bollards are newly installed. Photo: Beverly Akerman


After dragging its feet for months, the city of Westmount has begun addressing traffic safety issues at a problematic intersection near Akiva School, following a May 22nd accident in which a parent was hit by a car.

Wolfensohn calls the situation outside the school at peak periods “chaotic,” with parents double-parked or illegally parked, serious traffic bottlenecks, illegal u-turns, “delivery trucks and city vehicles speed[ing] their way up and down Metcalfe in frustration… Add to this a very busy driveway out of the synagogue parking lot with a blind turn, and we have a recipe for disaster.” Warnings and tickets hadn’t curbed the mayhem.

Westmount’s initial responses “didn’t really acknowledge the seriousness of the problem,” Wolfensohn said. But official inertia appears to have ended after a car backed into Aaron Akerman (full disclosure: Aaron is this correspondent’s brother) as he navigated the intersection with his children, ages 6 and 7, on the rainy morning of May 22nd.

Thrown to the asphalt and banged up but not seriously hurt, Akerman fired off an email in support of changes to the intersection the same day. “I think it’s a matter of luck that nothing more serious has happened,” Akerman said.

The first response Akerman received had him shaking his head: the committee wouldn’t assign a crossing guard, according to Campbell, because the intersection was “dangerous due to [poor] visibility and illegally parked cars.”

Further exchanges, however, led Campbell to inform Akerman by email of the decision “to increase the length of the loading zone on the south side of Cote Road (sic)” and install plastic bollards to enhance visibility at the Metcalfe/Springfield intersection.

On the morning June 11th, David Sedgwick, Westmount’s public security director, met the two Akiva fathers outside the school to inspect the new setup. Sedgwick, who patrolled Westmount for 25 years before becoming security chief, agreed with Akerman and Wolfensohn’s evaluation of the traffic safety conditions at the school, noting that 4 p.m. pickups were even worse. His primary goal, he says, is “to make things as safe as possible.” He’s hopeful that the improved visibility due to the bollards will be enough to tame the problem.

Neither Wolfensohn nor Akerman appeared completely satisfied, vowing to continue to press for a stop sign, crosswalk, and crossing guard if the bollards don’t do the trick.

“Our first thought is to improve visibility, and if we need to put in a crosswalk, we’ll put in a crosswalk,” Sedgwick responded. Traffic speed and volume counts had been done the previous week; the intersection is on the agenda for the traffic committee’s next meeting, June 19th.

When asked why the traffic situation had gotten so much worse over time, Wolfensohn said he thought the problem stemmed from Akiva having doubled its enrolment between 2002 and 2009. The Jewish parochial school now has approximately 350 students; another 100 or so youngsters attend the Shaar Hashomayim’s Foundation School day care in the same location.

Akiva head of school Levy says she’s “very grateful” for the new bollards. Following the accident, the school reiterated its drop-off guidelines in an email to parents, summarized here:

• Park only in prescribed “loading zone” spaces or legal parking spots.
• When backing into a parking spot, check carefully for pedestrians. Don’t rush.
• Using the designated crosswalks at Côte St. Antoine Rd. or Sherbrooke St. is safer than crossing at Springfield, which has no crosswalk.

Originally published on OpenFile.ca.
Posted by Beverly Akerman MSc at 20:15