I rarely catch White Coat, Black Art, but I was intrigued by the subject of the January 19th program “After breast cancer and failed reconstruction, this mom found beauty by going flat”, which I listened to recently. 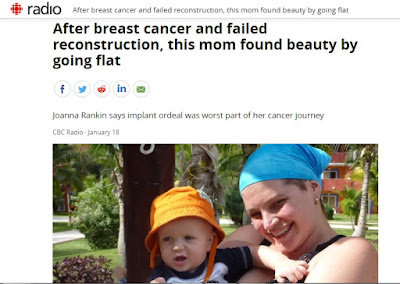 What surprised me was the program’s attempt to balance the terrible experience of Joanna Rankin, who describes being bullied into reconstructive surgery in Toronto (frankly, needing a double mastectomy at 32 means reconstruction was not her greatest worry) with the pro-reconstruction attitude of the “expert” interviewed by Dr. Brian Goldman on the program, Dr. Angel Arnaout, breast cancer surgeon and Ottawa region director of breast surgical oncology.

Basically, Arnaout said being happy and well-adjusted after breast cancer surgery reduces the chances of cancer recurrence. Which is misinformation, coming from a layman, but flat out shocking when delivered by a breast cancer specialist.

The reason [for encouraging immediate breast reconstruction] is because there is a lot of evidence now, especially in breast cancer, that your psychological emotions and your outlook on life is a very strong predictor of how well you will do from cancer, prognosis-wise. And that linkage of how you feel about yourself and therefore how confident you are and how well you present yourself and integrate yourself back into a normal life, and breast reconstruction is supposed to help with easing you back into a normal life and getting out there and doing exercise and being happy. All of it is linked in a lot of studies to your survivorship and your prognosis from a cancer point of view. There is a lot of evidence to show that if you are happier and you’re exercising, because you’re happier you’re taking care of your body and you’re eating well, all those things reduce your chances of recurrence. And so having the option of breast cancer reconstruction is actually now considered part of cancer treatment.

In this rambling, slightly incoherent paragraph, Dr. Arnaout is actually saying that how a patient/survivor feels about herself will directly influence cancer recurrence and "survivorship". Now, this is a wonderful thing to believe (especially if you’re a cancer patient/survivor or surgeon) but unfortunately, it’s not true. Which makes it gobsmacking to have been uttered on CBC, and by an oncology specialist to boot. That Goldman has no problem accepting this proposition is equally staggering.

Because the corollary is: if you don’t feel good about yourself or you don’t have "a good attitude", you’re bringing the cancer (or recurrence) on yourself.

This is known as blaming the victim.

This isn’t just my opinion. The American Cancer Society website goes to great lengths to dispel these antiquated notions, on their page on “Attitude and Cancer”:

Treatment that deals with our emotions and relationships (sometimes called psychosocial interventions) can help people with cancer feel more upbeat and have a better quality of life. But there’s no good evidence to support the idea that these interventions can reduce the risk of cancer, keep cancer from coming back, or help the person with cancer live longer.

Further down that page, in a section on “Personality Traits and Cancer”, they go on:

For many years there have been those who were convinced that people with certain personality types were more likely to get cancer. The common thought was that neurotic people and introverts were at the highest risk of cancer. Along with that, some believed that personality affected the outcome of cancer – the likelihood that a person with cancer might die….In 2010, the largest and best-designed scientific study to date [on the question] was published. It looked at nearly 60,000 people, who were followed over time for a minimum of 30 years. This careful study controlled for smoking, alcohol use, and other known cancer risk factors. The study showed no link between personality and overall cancer risk. There was also no link between personality traits and cancer survival.

Finally, in a section titled “Does a positive attitude affect cancer?”, they write:

…many people want to believe that the power of the mind can control serious diseases. This is a comforting belief that can make a person feel safer from the risk of serious illness. If it were true, you could use your mind to stop the cancer from growing. But the down side of such beliefs is that when people with cancer don’t do well, they may blame themselves.To learn more about attitude and survival, researchers looked at the emotional well-being of more than 1,000 patients with head and neck cancer to find out whether it affected survival. Over time, those who scored high on emotional well-being showed no differences in cancer growth or length of life when compared with those with low scores. Based on what we know now about how cancer starts and grows, there’s no reason to believe that emotions can cause cancer or help it grow.

At Mayo Clinic.org, one finds, in a section on cancer myth-busting, the following:

Myth: A positive attitude is all you need to beat cancer


Truth: There’s no scientific proof that a positive attitude gives you an advantage in cancer treatment or improves your chance of being cured.

Huge sums are no doubt being spent in the public system to provide reconstruction to mastectomy patients. Joanna Rankin’s story is that some women are bullied into accepting it. Maybe CBC journalists should be investigating that, and whether many/most oncology specialists have confused quality of life issues with the science of recurrence.

CBC Journalistic Practices related to Science and Health read, in part, “In matters of human health we will take particular care to avoid arousing unfounded hopes or fears in persons living with or close to those living with serious illnesses.”

Given the above, I would like Drs. Goldman and/or Arnaout to provide evidence for the notion they are putting forward: that breast reconstruction (and “a good attitude”) results in lower breast cancer recurrence rates.

And, if they cannot, I would expect the program to be corrected or pulled, and an apology to be prominently published on the White Coat, Black Art website.

Because people with cancer, and those who love them, deserve better from the CBC than to be told that their sadness, anger, or other “bad attitude” can give them cancer.

Posted by Beverly Akerman MSc at 20:29