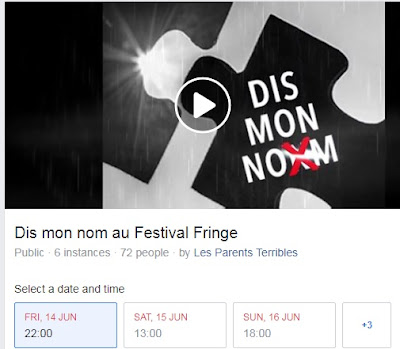 I went to see my friend Ellie Chartier’s wonderful bilingual Fringe show Dis Mon Nom last week. It’s about Paul Bernardo, Karla Homolka, and their crimes. But in this era of #MeToo and MMIW, it’s really about so much more. I thought I would catch up with Ellie and ask her about the origins of her piece.

Where did the idea for this Bernardo-Homolka piece come from?
From a role that Lucas [Chartier’s son, also featured in this play] got a few years ago, playing Paul Bernardo. I started thinking about what it means to be this terrible person. A psychopath. I wrote a first version, Paper Thin Walls, that really centred on the actor-character relationship, two actors preparing to play Bernardo and Homolka. After getting some feedback, I thought of all the other people affected by the aftermath. Which led me to the rapist’s victims, these women who did not get their day in court. All I could find out about them was general descriptions of what he had done to them. Some of these women prepared for months to testify. But because of the nature of the case, he was never confronted by them in court. I was really upset by that.

Does #MeToo come into this?
It’s addressing the choice. The choice to speak openly if YOU choose to.

So you feel the justice system let these women down?
Yes, the system failed those victims in general.

What could be done differently? You understand they charged him with the worst crimes, hoping to put him away for life, and sparing the costs associated with adding and proving "lesser" crimes?
Yeah sparing the cost, as you say. But these women needed that day in court.

Along the lines of those 150 victims of Larry Nasser speaking in court? Confronting their molester?
Something should have been done for them. I don't think plea bargains should be used in this kind of crime.

Would you say you were angry on their behalf?
Yes, I am. And also that she's out.

How important is anger to the creative process? That she and her lawyer played the system? Do you believe she was the real murderer, as he claimed?
It's a mix of anger--and I'll say astonishment, for lack of a better word. I was really amazed when I learned about these other victims. And about her. I was 20 once and had a younger sister and what she did to her sister, I'm sorry but as much you are in love with a guy, this was unforgivable.

Do you buy that she was a victim too?
Her best friend was working in a center for battered wives. She knew exactly how to portray one.

Do you think she hurt herself to pose like a battered wife (like in Gone Girl)? That she is the real murderer, as he alleged?
She knew how to push his buttons. If you read the transcripts of how the murder happened she played an active part in the torturing and murders.

So what’s next? You mentioned continuing with this piece, taking it further.
In the next version, I want to explore more how she got out.

You’ve to mention the criminals’ names as few times as possible. The title of your piece: to whose name are you referring?
The title is for the victims.

Posted by Beverly Akerman MSc at 17:33