When a picture is worth a thousand words 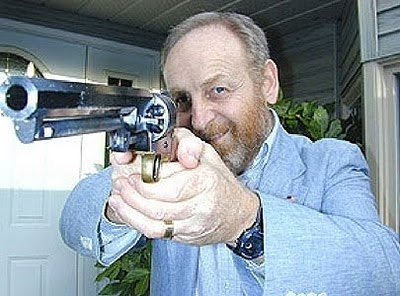 The meaning of the phrase “a picture's worth a thousand words” was made manifest at this week’s hearings on Bill C-391, the Conservatives’ latest attempt to murder the long-gun registry, a registry the Supreme Court of Canada has ruled to be an essential component of our gun safety system. Tune into the House of Commons hearings of the Standing Committee on Public Safety and National Security (SECU) at

http://parlvu.parl.gc.ca/ParlVu/ContentEntityDetailView.aspx?ContentEntityId=6217; around 1hr 51 minutes into the session, Bloc Quebecois MP and SECU member Maria Mourani brandishes the attached image of Gary Mauser, appearing as a private individual, though he was in fact appointed in 2007 to the government’s firearms advisory committee (FAC). Mourani shows Mauser the photo, verifies it is of him, and asks how many guns he owns.

“I’m not sure,” Mauser responds.

She presses a bit more—“How many shotguns do you have?...You have guns but you don’t remember how many?”

“By contrast, you aren’t too old to carry a weapon like this, though,” she counters.

“…the photographer asked me to pose like this and I resisted. And obviously, I should have resisted harder,” he admits.

“So you’re the big advisor on issues that concern firearms,” Mourani finishes. The photo shows Mauser aiming but Mourani’s the one who scored the direct hit.

The photo illustrated Susan Delacourt’s 2007 Toronto Star article “Panel loaded with gun buffs,” about the then-new makeup of the Conservative’s FAC. Originally from the Canadian National Firearms Association website, the image was, for obvious reasons, quickly removed. But it haunts us still, as does Mauser’s committee, which was, Delacourt wrote, “appointed and operating in virtual secrecy…made up almost entirely of pro-gun advocates opposed to the firearms registry.”

Mauser is touted as an emeritus professor and éminence grise of 's gun lobby. In 2006, when the Conservative government cleansed the FAC of police organization representatives, suicide prevention experts, women's and health advocates, they then appointed gun dealers and people like Mauser and Tony Bernardo, head of the Canadian branch of National Rifle Association (NRA). In 2001, Bernardo crowed to his Canadian Institute for Legislative Action (CILA), “We have been working hand in hand with the NRA regarding international issues for the past three and a half years...in fact, the NRA was instrumental in the formation of CILA…the NRA provides CILA with tremendous amounts of logistic support.”

By an amazing coincidence, the NRA's lobby arm is called the Institute for Legislative Action.

Okay, maybe it isn’t a coincidence.

Bernardo also appeared before SECU last week. Interestingly, CILA’s website doesn’t appear to have been updated since 2008, but the website of an allied group, the Canadian Shooting Sports Association (CSSA) carries an endorsement by Wayne LaPierre, NRA Executive VP: “The NRA of America supports and endorses the work done by the CILA and strongly encourages all Canadian firearms owners to become CILA supporting members.” Another recent posting has LaPierre saying repeal of Canada’s long-gun registry would be “huge on the world stage and made all the more significant as a backdrop in the pending debate on the United Nations' global gun ban…As my friend and colleague Dave Kopel, research director of the Independence Institute in Colorado, astutely noted, ‘Repeal of the Canadian registry would be of tremendous global significance. Repeal would also shatter the claim by the Canadian gun prohibition lobby that gun control in is an irreversible ratchet.’”

These two themes—the derailing of the UN’s international treaty limiting trade in small arms (responsible for about a thousand deaths daily), and that gun control anywhere threatens the right to bear arms everywhere--are traditional NRA bugaboos, as discussed in the New York Times by Josh Kurlantzick, special correspondent for The New Republic and a visiting scholar at the Carnegie Endowment for International Peace (see “Global Gun Rights?”, NYT, September 17, 2006).

Ostensibly, the NRA constitution prevents it from giving money to groups outside the but according to Kurlantzick, the NRA stopped openly fighting gun control abroad because it “enabled gun-control advocates to accuse local gun lobbies of selling out to .”

Instead, the NRA counsels indigenous gun lobbies to recast restrictions on gun ownership as threats to civil liberties. Indeed, Al Dorans, CILA’s 2001 operations director is on record noting that CILA and the NRA “shared a belief in the existence of a worldwide conspiracy to rid the world civilian population of small arms such as hunting and sport rifles, shotguns and handguns,” according to a 2001 article by Tim Naumetz for Southam Newspapers. The NRA has also repeatedly given “lobbying seminars” during Canadian election campaigns.

Though Bill C-391 masquerades as a private member's bill, when ministers of the Crown speak on behalf of a bill and spend money on fliers attacking opposition members for their stance on a bill, well, if it waddles like a duck and quacks like a duck, chances are it's a friggin’ duck. And, as NRA style paranoia spreads, it is clear that the organization is up to its eyeballs in ’s gun lobby, and has been for some time.

Posted by Beverly Akerman MSc at 10:44