The Hardboiled Stress Of Being Santa 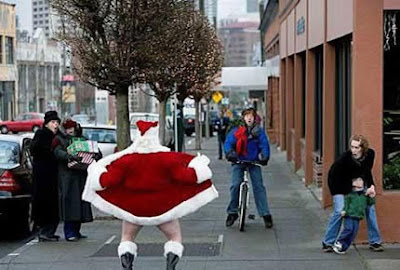 Encore Presentation, and just in time for Hanukah!

3. MSN News, September 16, 2009: Questions of credibility and wrong-doing continue to dog Mulroney. His relationship with Schreiber becomes the focus of further concern as the businessman makes public documents showing where and when Mulroney took cash payments for lobbying government. The allegations result in a commission called by Prime Minister Stephen Harper, headed by Justice Jeffrey Oliphant. Earlier this year, Schreiber is extradited to Germany to face charges of bribery, tax evasion and fraud.

It's the story that refuses to die, and so, yours truly, intrepid tabloid reporter and all-round diva Renta Yenta, has decided to come clean, to cough up the ganze megilla—that is, to fill you in on the whole pungent, sordid tale…

Perhaps it was inevitable, given the pressure on him and all, but still, I was shocked when, just days before Christmas of 2007, the world was confronted with Santa's strange behaviour—writing letters to kids filled with swearing and descriptions of lewd and lascivious acts…After I roused myself from my daydream, I realized this wasn't the Santa Claus the world knew and loved.

I smelled a rat.

And so, partly to cope with my own devastation (some of my best friends are Christian, see?), I decided to apply my particular perspicacity and get to the bottom of it. After all, I know a good story when it bites me on the ass. And sometimes a newsgal's just gotta make a living.

No matter who gets hurt.

Soon as I pulled myself together, I jumped on the blower. And before you could say “Merry Christmas,” bingo! I discovered good ol' Santa was on a publication-banned court-ordered stress leave that stretched from the middle of December to 5 p.m. Christmas Eve. All provided, of course, courtesy of the Canadian taxpayer.

I couldn't reach Santa himself but after much tsuris(1) and tuml(2), managed to make contact with his arctic NGO, AGI(3). I knew they'd be running spin big time on this baby and that odds were good they'd be looking to play me…but then I thought, what the hell, couldn't hoit.

What follows is a worldwide exclusive, a transcript of the conversation I had with Santa's personal representative and communications consultant, PR person Caspar Flack, his psychiatrist, Dr. Mel Chior, and his accountant-cum-aroma therapist, Balt Chazzer(4).

“First off,” Flack said, “you gotta promise never to refer to this here situation with Santa Claus as a nervous breakdown, okay? And, uh, we're still off the record, right?”

“Not a snowball's chance,” I said, scribbling gleefully.

“My God, what a fucking nightmare!” he shrieked. I heard a repeated smacking sound, suspiciously suggestive of someone banging the telephone receiver against his forehead, which was followed immediately by the click of a disengaged line.

Now Dr. Chior, the psychiatrist, jumped right in. “Ms. Yenta, you'll have to forgive our Mr. Flack. He's monitored over fifty thousand reports from around the world in the six days since the news of the rude letters broke. He's exhausted, I'm afraid, hasn't slept a wink. But you're the first journalist to have uncovered Mr. Claus's court-ordered rest period, so before we go any further may I just say some hearty congratulations are in order?”

“Thanks very much,” I said. (Don't think yours truly can't tell when she's being buttered up!) “But can you tell me what exactly precipitated this extremely unSanta-like episode?”

“Well, any number of things, I suppose. But I guess it all starts with the information revolution.”

“Really,” I said, thinking WTF(5) doesn't? I figured he was looking to brush me off, to tempt me with some wild goose chase. (Little did I realize just how wrong was my choice of livestock…)

“Think about it this way. Before Al Gore invented the Internet, most of the world's people had never even heard of Mr. Claus. So he served maybe one, one-and-a-half billion people. But now, what with broadband, everyone on the mother-lovin' planet knows of him, and demand for his services has skyrocketed. Unfortunately, his funding hasn't nearly kept pace.”

“Not nearly,” Chazzer chimed in.

“I mean, we've been writing Can Con grants till our hands cramp—let's face it, Mr. Claus is a performance artist of mythic proportions--but with this tight-fisted Conservative regime, he might as well be pissing into the wind. If you'll excuse my French.” Mel Chior cleared his throat. (I was getting the distinct impression this guy was in love with the sound of his own voice.) “Since Google and Wikipedia came on the scene, Mr. Claus has been forced to do much, much, more--and all of it without one thin dime of increased support.

“Burnout was only a matter of time.”

“But why now, exactly?” I persisted.

“I blame the Boomers myself,” Chazzer, the accountant and aroma therapist, chipped in, “and their inflated sense of entitlement.”

That sounded pretty promising (editors love stories that appeal to a broad demographic, and if you've seen a Baby Boomer's hips lately, you'll know they're about the broadest demographic going!). I encouraged Chior to keep talking.

“Well, they can be so demanding. It's as though they never outgrew their infatuation with Mr. Claus. Children in earlier generations, they cease and desist after the age of ten or so, but these Boomers…well, they're in their sixties now and they still haven't stopped with their endless requests. Lower taxes, free health care, Viagra in the drinking water, a Guess Who reunion tour…it just never ends. And when Mr. Claus realized there could be another thirty years of this…” His voice trailed off.

“But why an aroma therapist? Mr. Chazzer?”

“To cope with the unexpected side effects of the push toward sustainable development,” Chazzer said.

“You know, all those websites where you can give mosquito nets, chickens, or a goat on behalf of a loved one to a family in the third world."

Flack had finally made it back on the line, and now he pitched in, too: “This year, Santa had twelve thousand goats on order. Twelve frickin' thousand! Imagine what we were faced with, trying to keep them all under control up here at the North Pole. I tell you, the shit was flying! It was like being held at gunpoint during Question Period--with Gilbert Gottfried filling in for Rhona Ambrose! And you know that expression, ‘randy as a billygoat?' Well, it's true! The butting and rutting going on up here--it was just like being on Parliament Hill--or at the Assemblée nationale! The poor elves were beside themselves.

“Not to mention,” Flack added darkly, “what happens to the bleedin' reindeer when they start making all those tropical deliveries.”

My spidey sense kicked into overdrive. “Why, what does happen to reindeer when they make all those tropical deliveries?”

“Well, they're cold-weather animals, innit? In the tropics, they'd be sweating incredible-like, wouldn't they?” Flack said. “And do you think anyone ever bothered to give just the teensiest, tiniest THOUGHT to what nine sweaty, overworked reindeer SMELL LIKE?! No, of course not! None of those green revolution types ever consider the consequences of their little gift-giving fads on poor old overworked Saint Nick!”

“And that's where the aroma therapy comes in,” Chazzer added.

They kept on tryin' but I wasn't buyin'. “I hear what you're saying, but to tell you the truth guys, while all this sounds like a bit of a pain, it hardly explains why Santa's gone off the deep end. Writing pornographic letters to children? Is this Santa's workshop we're talking about or the Christian Brothers? Why now? And why Ottawa, of all places?” (Your intrepid reporter may be a Yenta, but I wasn't born yesterday!)

“Flack,” said the psychiatrist finally, “it's not working.”

“Don't do it Mel Chior,” Flack shouted, “For God's sake, man, don't! We've got to stick to the communications strat--” He was cut off mid-kvetch.

“I can see we're just going to have to level with you, Ms. Yenta,” Mel Chior said, and his voice dropped a mellifluous octave. “It's about the Conservative caucus. And Brian Mulroney's grandchildren.”

“What?” I said, in consternation. “Mulroney's grandkids? What do they have to do with anything?” (That the Conservatives were mixed up in this was a yawner but I knew this new youth angle would make my editor pish(6) himself.)

“For the past month, Mr. Mulroney's grandchildren have been sending letters daily, asking Mr. Claus—begging him—”

“--to restore their grandfather's reputation. Ditto for the government caucus.”

I chewed on that for a sec. “That'd be a tough one,” I said. “I mean, he IS Santa Claus 'n all, he does some amazing things, but a miracle-worker he's not. Those poor kids.” (I'll never have it in me to feel sorry for the Cons(7).)

“You still don't get it, do you?” the aroma therapist interjected. “Karlheinz Schreiber has grandchildren. And a great-grandchild, too. Don't tell me you've forgotten what Santa's main responsibility is?”

“His raison d'être, as it were,” said Mel Chior.

Being of the Chosen persuasion, I puzzled this for a few ticks—was this some kind of goyische(8) trick? “Bringing presents?” I finally offered.

“No!” (Flack was back again and now all three of them were at me.)

“OH. MY. GOD,” Flack roared. “Chazzer, will you just go somewhere and stifle your damn self?” (There was a strangled sound and for a moment there I thought I heard him doing that thing with the receiver again.)

“Santa's most important job is to figure out who's been naughty!” Chazzer exclaimed.

“I tell you, the stress on Mr. Claus has been unimaginable,” the psychiatrist continued.
“Downright intolerable! And then, seeing all those Ottawa postmarks…Mr. Claus just… blew a gasket, as we say in the trade. He's not been trained to deal with anything even remotely like this. As the DSM-IV would describe it, he's gone completely round the bend.”

“That's terrible,” I said. “That really stinks!” (You should pardon the expression.)

“Indeed,” the psychiatrist said. “Unfortunately, no matter what Mr. Claus does, I expect Mr. Mulroney's grandkids--not to mention the Conservative party--are just going to have to suck this one up.”

“Isn't there anything you can do?”

“I doubt it,” said the accountant-slash-aroma therapist. “We've wracked our brains and come up with nothing. Nada, zip, zero, zilch! And we can't even get any high-priced advice. The big boys at Navigator(9) won't even take our calls. And The Strategic Counsel(10)? They won't touch us with a 10-foot pole.”

By now, Flack was audible sobbing in the background.

“Too tragic,” said the psychiatrist. “No, nothing more to be done, I'm afraid.

“This is one of those things, I fear. Mr. Mulroney's just going to have to take this one on the chin.”