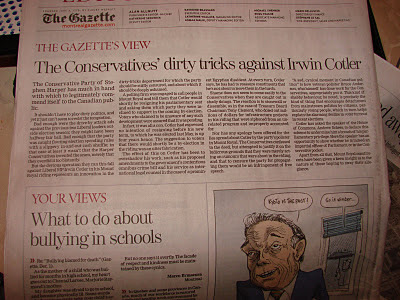 They say a picture is worth a thousand words. Here is my picture of your Dec. 8th editorial page, “The Conservative Party’s dirty tricks against Irwin Cotler” just above almost a half-page of letters on “What to do about bullying in schools.” The lies and intimidation shown toward the people of Mount Royal riding is surely an adult example of bullying run amok. Aren’t there already laws against that? Shame, Mr. Prime Minister: when will you speak out against such dishonest and unstatesmanlike behaviours practiced in your name? You have allowed party zealots to dishonour our political process. Again.