Review of ‘Arrhythmia’ by Alice Zorn 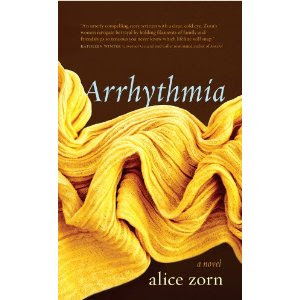 Though set a mere decade ago, on the cusp of the new millennium, Arrhythmia is an impressively old-fashioned novel based on the ancient and captivating geometry of the triangle.

The love triangle, that is.

Perhaps only a science nerd gone literary would find it peculiar that a book about a gastroenterology department secretary would employ, as its central motif, a dysfunction of the heart. But that’s just one of the mysteries of Alice Zorn’s second book and first novel, which follows on the heels of her 2009 debut story collection, Ruins and Relics.

Zorn, who hails from Ontario but has lived in Montreal for years, has written an English book about multiple overlapping relationship triads in French Montreal.

Her main character is Joelle, a blond ditherer of exceptionally mousy temperament. Joelle is married to Marc, whose meticulous nurse’s heartbeat is probably set via OCD. As the novel opens, in the winter of 1999, Marc is about to cheat on Joelle, his wife of 12 years (no kids), with Ketia (I am not revealing any more than the back cover blurb does).

Ketia is a nubile young nurse-in-training from a Haitian diaspora family.

Meanwhile Diane, Joelle’s somewhat bossy BFF, happily plays house with her Moroccan lover Nazim. The third side of their triangle is Nazim’s family. Zorn takes pains to explain the far-away family’s point of view, but we’re still left with the politically incorrect truth that, in their universe, by living with Nazim sans marriage, Diane would be considered a whore. So he simply neglects to mention her. This omission loses its lustre when Nazim’s sister Ghada announces she’s coming to Montreal to procure a bride for him.

Despite its brace of female protagonists, virtually the entire plot of Arrhythmia is put in motion by the male characters. Marc, the older man who should know better, pursues Ketia with a single-minded lust that would turn the head of the most chaste of romance heroines. Diane’s life is plunged into chaos by Nazim’s decision to keep their relationship from his family. And Joelle, despite noting that she and Marc no longer engage in marital relations, apparently hasn’t a clue that whatever love Marc felt for her has flat-lined. His feelings for Joelle (we are informed) oscillate between irritation and disgust.

These women are reacting, not acting. Things are done to them, done despite them. They are no more the stars of their own life stories than are Austen’s governesses. More...

Posted by Beverly Akerman MSc at 11:54