Hail, Alma Mater, we sing to thy praise;
Loud in thy Honour, our voices we raise.
Full to thy fortune, our glasses we fill.
Life and Prosperity, Dear Old McGill.
~McGill University Song Book

It started at McGill on March 3rd, 2012. A site reminiscent of Wikileaks went up, called, unoriginally, McGillLeaks. And it sounded pretty ominous for the university.

We are McGillLeaks. From sources whose anonymity will be protected, we have received hundreds of University documents, many marked confidential or strictly confidential, pertaining to McGill’s corporate fundraising efforts. Over the coming three weeks, beginning today, we will release these documents to the public. The documents contain strategy briefs, lists of individual and corporate targets, donor profiles, travel information, memoranda, and more. We have verified the authenticity of the documents, and their content has not been altered in any way… 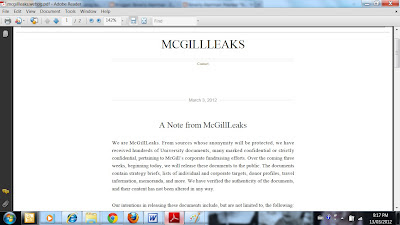 The first set of leaks contained confidential documents from McGill’s Development and Alumni Relations department. Files replete with donor information, some of it personal, as well as profiles of donors and potential donors, including hoped for amounts the “prospects” or “suspects” could be induced to unload on "Dear Old McGill."

The site sat, ticking like an old fashioned time bomb until, several days later, it was mentioned in The McGill Daily.

Reaction was sharp and swift, of the take-no-prisoners variety. The links to the downloads were removed after the university told the server a crime had been committed. “A crime against the university,” according to Olivier Marcil, McGill’s vice-principal of external relations. A little strong, perhaps, but at least he didn’t call it a crime against humanity.

The McGill Daily, after taking legal counsel, was also induced to take down its links to the information. According to The Daily, McGillLeaks also had files on “industrial partnerships – notably a Memorandum of Understanding between McGill and Canadian pharmaceutical company GlaxoSmithKline Inc.”


McGill has apologized to its donors and a police investigation is under way.

Clearly, somebody has it in for “Dear Old McGill.”

Though it wasn’t long ago that the university launched Media@McGill, mandated to function as “a hub of research, scholarship and public outreach on issues and controversies in media, technology and culture,” it’ll probably be a cold day in hell before we’ll see this organization, based in McGill’s Department of Art History and Communication Studies, analyzing the significance of the week’s humiliating McGillLeaks event.

Which leaves us to do the dirty.

Let me practice full disclosure here, even though McGillLeaks—while paying lipservice to transparency--did not: I have a BSc and MSc from “Dear Old McGill,” and worked in McGill affiliated research labs for a good two decades.

But I am not a mindless McGill booster—in fact, the meagre donations I’m capable of I send along to McGill’s School of Social Work, on the off chance that they will actually do some true short-term good with it, rather than spending it on some amorphous future payoff of genetic research.

But—as I am unfortunately wont to do—I digress.

So let’s look at what McGillLeaks intended to do, and take a stab at figuring out whether they accomplished their brief.

Their intentions, as stated on their now empty website (http://mcgillleaks.wordpress.com/), were threefold:

I wasted a good chunk of my life lamenting having missed coming of age during the incredible effervescence the 1960s represented: Woodstock, the Vietnam War, “the whole world’s watching!”, the burning of bras and draft notices, the civil rights movement, “Black is beautiful,” “Vive le Quebec libre,” “maitres chez nous”…arriving at McGill in 1979, it felt like I’d missed all the action.

But nostalgia ain’t all it’s cracked up to be. 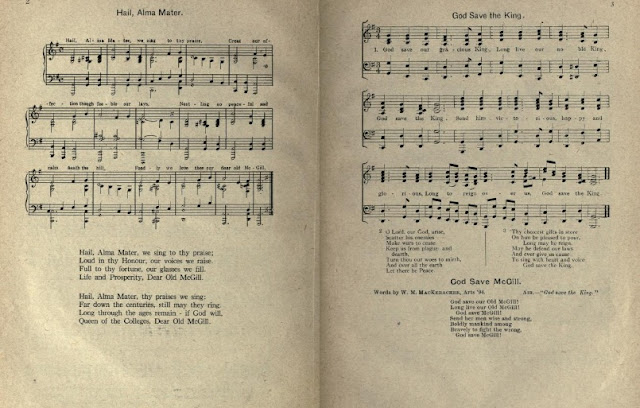 Many of Quebec’s current CEGEP and university students, currently voting on striking over increases in tuition fees—guys, a strike means withdrawing services that OTHERS depend on!—are clearly suffering from the identical adolescent need to rattle the cages of their elders (“squares” in ‘60s parlance), not to mention hoping for a little respite from mid-term cramming.

McGillLeaks may have sprung from there, or from one or more of the disgruntled employees we saw during the recent MUNACA strike (and, as a former McGill non-unionized employee who stupidly accrued zero pension benefits despite nearly two decades in molecular genetics research, I salute MUNACA’s having stuck to their guns).

Which brings us to the leaks themselves.

Does anyone really need to know McGill donors’ birthdates? Or that a locally-born billionaire has never given McGill one red…er, martlet, cent? Or the history of a Montreal magnate’s “frequent clashes in business as well as in his personal life”?

The affairs of the rich and infamous are often paraded as “news” for the amusement of the hoi polloi. McGillLeaks at least makes a switch—momentary though it may be--from the discussion of the undies of starlets (or lack thereof), not to mention the state of Angelina Jolie’s forearms.

No doubt, it is grossly embarrassing to the university to have the personal information of major donors—or, even worse, potential big fish—revealed for general consumption. But in the Vikileaks era, does anyone really believe in privacy anymore?

For me, among the most interesting tidbits a brief scan revealed was that noted genetic researcher Lap-Chee Tsui has become Vice-Chancellor and President of the University of Hong Kong. I also learned about Hong Kong’s Order of the Bauhinia Star, created to replace the British honours system following the reversion of sovereignty to the People's Republic of China.

But this kind of trivia is also available on Wikipedia.

Creepier are the dossiers about more ordinary people, donors of little-to-nothing, evaluated via “research” as potential big kahunas. The entries include notes about the value of the homes in the areas in which they live. Eww.

What the documents reveal foremost is the tremendous undertaking that is major modern fundraising. But is it a surprise that an enterprise like McGill, which raises hundreds of millions of dollars, would do so in an organized, systematic manner?

Could we expect any less?

Do the people at The McGill Daily or McGillLeaks really think this kind of money is raised over a couple of beers at Gert’s? Would they rather even more of our tax dollars replace the money patiently gleaned from the wealthy and corporations?

Despite some ruffled feathers, McGill will survive, and so will its donors. Hopefully, the adolescent need to humiliate their elders will pass with this generation.

But frankly, I’m not holding my breath.

The children now love luxury; they have bad manners, contempt for
authority; they show disrespect for elders and love chatter in place
of exercise. Children are now tyrants, not the servants of their
households. They no longer rise when elders enter the room. They
contradict their parents, chatter before company, gobble up dainties at the table, cross their legs, and tyrannize their teachers.