How about this for an ebook cover?

Feel free to let me know what you think. I must warn you, the book is most definitely NOT all hearts and flowers. In fact, it's more like an honest appraisal of the heartbreak that is part of growing up, becoming an adult, a parent--or not!--and an elder...

But it's still mostly about love. And its loss. 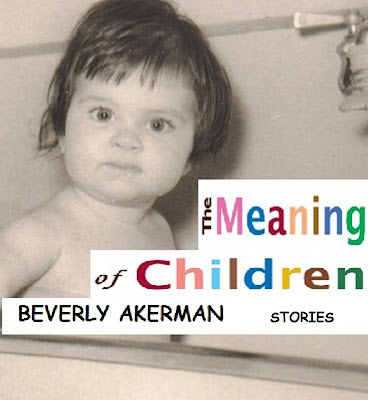 In fact, here are some excerpts of interviews I did last spring, when the book was first released in Canada.

From the Mutsumi Takahasi Interview on CTV News:

MT: Loved the book. So each one is told either by a child, or it’s about a child. And it’s interesting because I think depending on the age of the person reading it, you relate to different ones. But especially to feminists, growing up with it, wrestling with our beliefs, and whether it worked out or not.

BA: I grew up with feminism in the 60s, so I grew up with feminism just being part of life. Women should be able to do anything they wanted. And I think one of the problems is that we sort of overshot is we didn’t have enough respect for traditional women’s occupations. I worked in genetics for 20 years, in research for over 20 years, I had three kids, I tried to do everything, I tried to juggle everything, and it’s really difficult to juggle everything. You get burnt out. And I’ve rediscovered the respect that we should have for traditional women’s occupations, motherhood, nursing, teaching, nursing. These are very important.

MT: Because what you find is that a lot of women that you see in this book are trapped. We were trapped by what we were brought up to believe. And then we’re trapped by the marriages we find ourselves in, and the children we have.

BA: Well, we change over time and sometimes we’re sort of stuck in the situations we set up for ourselves 20 or 30 years ago and you sort of wake up one morning and say, ‘wait a minute, what am I doing here and how do I fix it?’

MT: But on the other hand, each story ends with a certain resolve. There’s that sense of okay this is my situation But. And that’s what the meaning of children is. And yet, it’s about hope. It’s about the future…

From the Anne Lagacé Dowson Interview on CJAD Radio:


BA: As feminists coming of age in the ‘60s and ‘70s, we were so keen on making the best of all the opportunities that had been denied us for generations that I think we bought into the idea that teaching and nursing and mothering and care giving are lesser occupations. And of course they aren’t. They’re very, very important to all of us, especially as we age and become more and more dependent on caregivers. So I just am hoping partly to honour that fact of women’s lives

ALD: In time for mother’s day. So if you are casting about for the perfect mother’s day gift, this might be it. The book is called The Meaning Of Children by Montreal author Beverly Akerman and it’s a collection of 14 short stories which sort of covers the range of experience from the point of view of children, Mums, and also aging parents as well. It’s all there in this lovely little book…short stories about life in a family that might just resemble yours…

What’s your sense of how your feminism has coloured the stories?

BA: I think it definitely has coloured the stories. There’s a story about abortion…I’m a prochoice feminist. It’s a very hard decision for a lot of people but I’m still glad that it’s a decision that is ours to make and not some external group trying to run our lives…

ALD: I thought that was a very brave story, actually, that you wrote. Because I think you’re writing about something that a lot of people have experienced but still feel very badly about talking about. It’s not out there in the civil discourse or in the public discussions of what family life is about.

BA:  I don’t think people feel comfortable acknowledging that they have had an abortion or that they’re related to someone who has. It’s still a very private family matter…

We’re very, very lucky to have grown up in the era in which we have where we do have so many more options than our mothers and grandmothers had. And we have to protect those options for the future generations. I think that’s very important too.

ALD: What will you be doing on mother’s day?

BA: I guess going to brunch with my parents! I’m lucky enough to have both my parents so…and getting cards and kisses from my kids.

ALD: And flowers, hopefully. That’s always a nice feature of mother’s day. But really, mother’s day should be each of our respective birthdays in some sense. You were speaking about some family member…

BA: My father-in-law thought on your birthday you should go and honour your mother because she went through so much. And he would know, he put his parents through a lot.

ALD: Well, we all do. Anyway, I wanted to congratulate you on the publication of this book and I hope it goes far far afield for you.

BA: Thank you very much. I hope people enjoy it.

Posted by Beverly Akerman MSc at 12:47