Yesterday was a really interesting day, in real life and on my Facebook page...

You can find me here, but I already have 5,000 followers (actually, I'm often over their limit. SHH!). 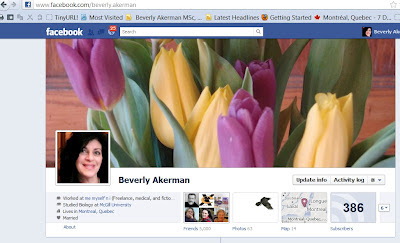 But I'd love to "meet" you: please subscribe to my posts and/or follow my book page: http://www.facebook.com/TheMeaningofChildren. 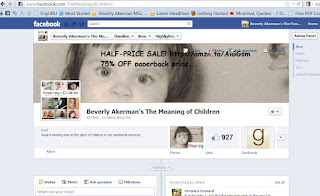 But I--as I am so often wont to do that my friend Sandy Dubya (also on FB--SHH!) sometimes accuses me of having ADD. Oops: so distracted by the subordinate clause (or whatever), I forgot to add "digress."

Started off the day by accompanying hubby at 6:30 am (okay, 6:40, but who's keeping track?!) to the Concordia University PERFORM Centre, their absolutely gorgeous new athletic centre! I was sorely tempted to skim Facebook while I was on the eliptical...but to tell you the truth, it's damn hard to type while moving on those machines (I suppose they should look into that...no, not really!)

Here are a couple of photos of the place, courtesy the University (actually, I just lifted them, but I don't think they'll mind!): 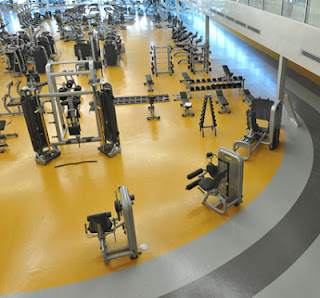 I'm not sure this inside view does it justice...let's just say it reminded me of Montreal's new concert hall...something about the blond Formica. Okay, maybe that's an exaggeration. But it was 6:40 am--I can be forgiven for making strangish associations.

Then it was on to a couple of hours of mundane daily tasks until it was time for the day's notable event: an interview with Jeanette Kelly for CBC Radio's Cinq a six show. 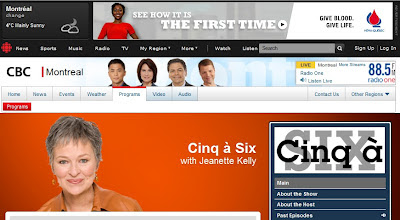 Should air Saturday between, you guessed it, 5 and 6 pm. We talked about my ebook experiment, and I revealed how many copies I gave away in 24 hours last Saturday...bypass the middle man, I say. For

"Very grateful to the CBC Cinq a Six people for having me in today...here's a photo of my CBC Prize Pack, with some careful product placement, bookwise. First person to name all books & authors pictured gets my Mike Finnerty pinup magnet (must say, Mr. F is looking pretty buff in this photo...)" 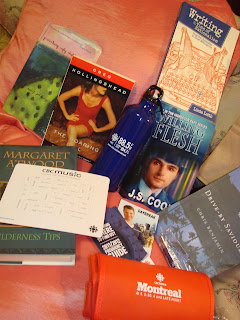 Here's a better shot of Mr. F, slightly fuzzy, but what can you do (maybe he was unclear on some concept or other when the photo was being taken):

In any event, all are cordially invited to listen to my conversation with Jeanette Kelly, tomorrow (SATURDAY) on Cinq a six! (show is 5 to 6 pm), 88.5 FM or live streamed at http://www.cbc.ca/cinqasix/

Sign up on Facebook--I'd love to know you'll be listening! Here's hoping I sound half-way intelligible... 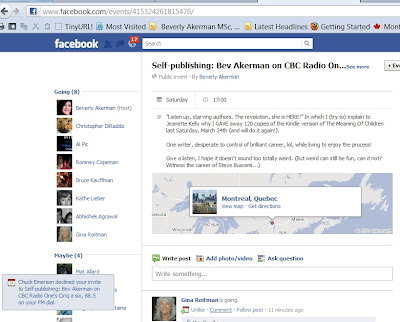 (Here's the link, in case you'd like to forward it to someone:

"Listen up, starving authors. The revolution, she is HERE!" In which I (try to) explain to Jeanette Kelly why I GAVE away 120 copies of the Kindle version of The Meaning Of Children last Saturday, March 24th (and will do it again!).

One writer, desperate to control of brilliant career, lol, while living to enjoy the process! Give a listen, I hope it doesn't sound too totally weird. (But weird can still be fun, can it not? Witness the career of Steve Buscemi...)"

The guns for teenagers advice comes from Canada's answer to Charlton Heston, Gary Breitkreuz, Member of Parliament from Outer Boondocks, Saskatchewan (with apologies to his constituents, I know that's not where YOU live...but I think it's where HE lives. Metaphorically speaking. Or maybe more like outer space...in terms of understanding gun crime in Canada).

A pithy quote from my piece:

"Though our Prime Minister may refuse to face it, rifles and shotguns are the firearms used most often to threaten women and children, and the weapons of choice in the murder of police officers."

Okay, so that's guns, the CBC...I am running out of steam here. 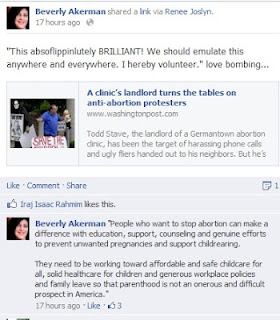 The Meaning Of Children is now half-price on Kindle! 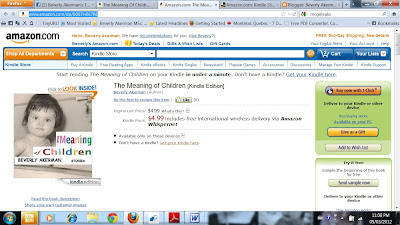