The Meaning of Children and The Bad Review 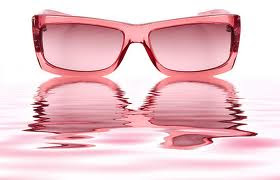 The Meaning of Children is divided into three parts, featuring stories with protagonists who are children, in the parenting years, or elders. Though I wish it were otherwise, many of the book’s stories are dark, reminding me of that Tolstoy maxim “All happy families are alike; each unhappy family is unhappy in its own way,” and its corollary, “If it’s happy, it’s not literature.”

Growing up, without the rose coloured glasses. To paraphrase Katie Hewitt in The Globe and Mail, these aren’t the wonder years. 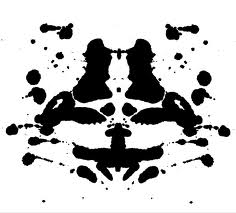 But reading a book is like taking a Rorschach test: what you get from it is deeply entwined with what you bring to it, with who you are.
Which brings us to The Bad Review. Writers are usually admonished to ignore The Bad Review (hopefully, there will only be one!) and focus on the good, and there is much wisdom in that advice. I have also been blessed to have received so much wonderful, positive feedback. But there is also much to be learned from the negative review…and so, despite the kerfuffle between Michael Lista in the National Post and CWILA, based on the earlier call and response round between Jan Zwicky and Zach Wells, I believe in writing, reading, and acknowledging, the bad review. And so, here is a discussion of mine.

Bee Markus oversimplified terribly when she wrote “what the fourteen stories in Akerman’s collection do is describe the myriad ways that mothering and marriage can damage and destroy a woman’s soul and spirit.” (B.A. Markus, mRb, vol. 14, no. 3, Summer 2011. Reproduced below; archived here).

There’s no doubt in my mind “that mothering and marriage can damage and destroy a woman’s soul and spirit (emphasis mine).” Not always, but sometimes. The thing is, my work doesn’t shy away from that. My book takes on the female experience, leaving behind the rose-tinted glasses. Maybe, deep in the heart of the mothering years, it can be hard to appreciate what, exactly, one is sacrificing. Maybe a little denial is not a bad thing.

But (in my opinion) there is much more in the book than what Markus saw; maybe the review says as much about her as it does about the book. That she saw the child point-of-view stories as introducing “the mother as a resentful victim” completely misses the point: that to grow up is to peel a series of layers of knowledge gleaned from experience. That growing up doesn’t end with an eighteenth birthday. It’s a lifelong trip.
Markus’s real problem may have been with the paperback’s cover: all those happy photos suggesting a light-hearted tiptoe through the parenting tulips. This was my publisher’s choice, part of the Faustian bargain that must be struck between gaining the reader (and, more importantly, the bookseller marketing department’s) interest and giving the flavour of the contents. I love the paperback cover and gave it my blessing, though I also warned it might lead to exactly the sort of reaction Markus appears to have had: the suggestion “that the stories behind the cover will most certainly be heart-warming vignettes celebrating the innumerable gifts that children bring to our lives.”

Several women, some “of a certain age,” as we say here in French, actually commented that the book was so much better than they thought it would be, based on the cover. They’ve had enough of the saccharine view that a woman’s life is consummated by motherhood. Which is one reason why I had a problem with Richard Wright’s Clara Callan, where Clara’s inner life, as represented in the series of letters she’s been writing, ends with the birth of her child.

I heartily acknowledge that my book probes the dark hearts of growing up and of mothering, but I also feel that the book as a whole is a much more balanced portrayal than Markus—and mRb--let on. Happily-ever-afterish stories do appear: “Paternity” and “The Woman with Deadly Hands” spring immediately to mind. What I’ve tried to do is to show you my 14 snapshots of life, with compassion. And without glossing over the hard parts.

Thankfully, there are a number of other, much more positive takes from reviewers and other readers. You may find many of them here.

The Meaning of Children is available as a paperback (~$15) or an e-book ($5). Decide for yourself. 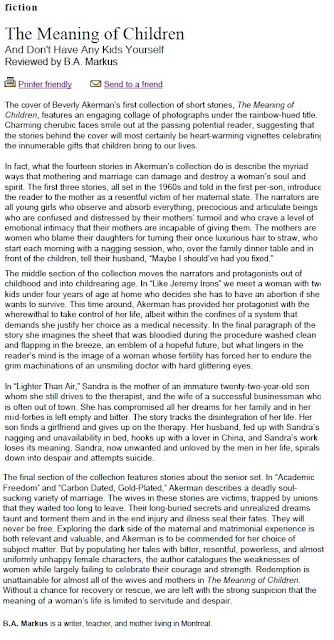 Posted by Beverly Akerman MSc at 15:40